Herbert J. Zomboni, known by the name of Zombozo, is a cruel and creepy clown mastermind.

Zombozo looks like a clown with pink hair and pale skin. He also has sharp white teeth and red lips. His eyes are orange and yellow. The jumpsuit he wears is striped dark and light grey. He wears big black shoes, black gloves, and a top hat. He has blue orbs on his hands and hat. 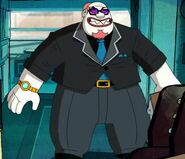 Zombozo is portrayed as a grim and cruel clown with a dark sense of humor.

At some point before Zombozo began a villain, he was a baker.[1]

In Clown College, Zombozo made his first appearance attempting to steal the people's wallets during a match whilst they were all hypnotized - until he was soon defeated by Cannonbolt.

In Zombozo-Land, Zombozo appeared again as the new owner of Adrena-World, where he used the relay towers and the hypno-tower (set up by the Circus Freaks) to hypnotize everyone yet again. However, he was defeated by Upgrade after having the latter reverse the tower's effects.

In Vote Zombozo, Zombozo appeared again with the Circus Freaks in Sleepy Town, where he hypnotized the people into voting for his campaign - until the Circus Freaks ditched him and was soon defeated by Omni-Enhanced Cannonbolt.

In Bomzobo Lives, Zombozo posed as Bomzobo, Max Tennyson's "driving instructor" attempting to take away his driving license and get him imprisoned - until being taken away by the police himself once his plans failed.

In Super-Villain Team-Up, Zombozo allied with Vilgax in attempt to gain revenge on Ben, as well as also help Vilgax with his plan in world dominance through his expertise on hypntosm. However, after constantly getting on Vilgax's nerves, he was thrown out from his ship.

In Dreamtime, Zombozo used a machine in order to enter Ben's dreams and constantly haunt him, and soon Gwen and Max as well too - until they all took advantage of being in a dream to cause his machine to malfunction.

In Welcome to Zombozo-Zone!, Zombozo was seen having already hypnotized everyone into believing that he was King (as well as making everyone act as in the medieval times) in an attempt to impress the Forever Knight. However, his plans were soon foiled once again after Gwen and Max (and eventually Ben as Four Arms too) broke free of his hypnotism, with an unimpressed Forever Knight ditching him.

In Party Poopers, he is now working at a child's center in an arcade. Frightwig convinces him to get back in the villain game, despite his many failures. Zombozo goes around tormenting children. Frightwig tries to avoid Zombozo running into Ben. Soon, Zombozo runs into Ben, and is defeated. However, he isn't arrested, and escapes with Frightwig.

He briefly appears in Mock 10, on the Sonitrain. He leaves after seeing Ben, Kevin, and LaGrange.

Zombozo is a boss in the game. Ben battles him on the "The Funhouse" level.

Zombozo's name is an amalgam on the words Zombie and Bozo, who is a famous clown played by many actors.