Zed is a female Anubian Baskurr currently owned by Kevin Levin, and formerly by Khyber.

Zed is a dinosaur and dog-like alien, being dark blue in color. She has spike-like hair running down from her collar to the tip of her tail. She has sharp red eyes and black lines on her neck and legs.

Zed used to wear a red spiked collar that had the Nemetrix on it, but now she wears a light blue collar with a gold bone-shaped dog tag. 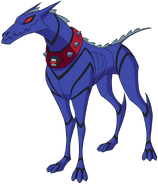 Zed, as Khyber's pet, was very savage and aggressive. She was also a lot more feral, and was very loyal to Khyber prior to the events that led to Khyber taking the Nemetrix away.

When Kevin saved her, Zed became loyal to him and soon became his pet, where he discovered her true gender much to Gwen's surprise. After being taken in by Kevin and, by extension, Gwen, Zed seemed to have calmed down and is a lot more tame than before.

Zed is able to understand others and their intentions better than most humans can.

Zed doesn't like Argit.[MW 1] However, she did let him ride on her back in Weapon XI: Part 2.

Zed is very fast, agile, and strong (able to throw Ben with ease). She was able to sense that there was something not quite right about Gwen's classmate, Dante, growling when he was near.

Zed used to have the Nemetrix on her former collar, which allowed her to transform into alien monsters that are the predatory species of Omnitrix aliens.

Nine predatory beasts have been seen used by Zed:

Zed is not completely loyal and can be manipulated by anyone who uses a whistle that is at the same frequency as Khyber's gills. Azmuth built a whistle in order to turn Zed against Khyber and Dr. Psychobos. This does not last if someone shows love and care.

Like a regular dog, if someone scratches behind Zed's ear, she will become tame.[1] This also does not last.