Xylene is a female Uxorite from the distant planet Ringa Morr[pop-up 1][1] and Max Tennyson's lover.

Xylene has mint green skin, with two tentacles on her head and one on her lower back. She has four long fingers, and ankles that bend inward. Her feet have three claw-like toes, two pointing forwards and one pointing backwards.

In a flashback, Xylene wore a grey sleeveless jumpsuit. 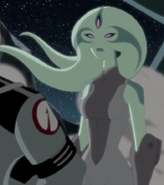 Xylene in a flashback

Xylene has a rather blunt personality by human standards, usually saying exactly what's on her mind. This has been shown to hurt the people around her, leaving Xylene confused, as she does not fully understand people's feelings.

During Xylene's early years she met Max Tennyson, who at the time was a Plumber, and became his girlfriend.[pop-up 2][2] Their history together is mostly unknown, though she noted that they would "always have Roswell". When it came time for her to leave Earth, she asked Max to come with her, but he declined her offer. Max and Phil then looked on as her ship departed.[1] Through that experience, she was given the grand responsibility by Azmuth of being the Omnitrix's carrier. Max was never aware of the Omnitrix or her role in guarding it beforehand.[pop-up 3][2] At some point, she also helped establish the Plumbers and Plumber bases on other planets with other species.[pop-up 1][1]

While Xylene was carrying the Omnitrix,[pop-up 2][2] Vilgax attacked her, seeking the device, causing Xylene to make the big decision of sending it to Max's location. Though her ship was much less powerful, she managed to land a blow on the command center of the Chimeran Hammer that would put Vilgax out of commission for a good while.[2] Unfortunately, Vilgax's drones boarded her ship and began hunting her.[1] With the pressure of being attacked, she programmed the pod to hone in on Max’s DNA signature, though it accidentally missed his exact location and the Omnitrix's containment pod was sent to the nearby forest.[pop-up 4][2] His grandson Ben Tennyson stumbled upon it there, being a close enough genetic match to be allowed to put it on.[pop-up 5][2]

Unfortunately, Xylene’s ship suffered a major blow from Vilgax’s ship and its hull crashed on Earth. She was then frozen for quite some time until a group of Inuits found her. She then quickly traveled to the Omnitrix’s location, where she came upon Ben, whom she battled for the Omnitrix. The battle was stopped when Xylene saw Max again, learning that Ben was his grandson. Max and Xylene quickly reconnected, but Ben had trouble trusting Xylene and disliked her. Later, the group was attacked by a Mechadroid and Max was kidnapped. Soon after, they found the drone at a dock and Xylene gave Ben access to Perk Upchuck to defeat it. Xylene departed Earth soon after. She asked Max to go with her once again, but he declined.[1]

Xylene is skilled in hand-to-hand combat and is strong enough to tear off a drones tendrils wrapped around Max. She also has superhuman acrobatic and gymnastic capabilities, and was only knocked out by a large drone hitting her. Her telekinesis and good reflexes come from the combined strength of her three brains.[pop-up 1][1]

Xylene can also use the tentacles on her head, as well as her prehensile tongue, as a weapon.

Xylene is highly intelligent and possessed extensive knowledge of the Omnitrix as well as the abilities of other aliens, such as Upgrade and Upchuck.

Xylene's main weakness is her not being as durable as other beings, meaning she can be physically harmed more easily.