XLR8 (pronounced "Accelerate") is the Omnitrix's DNA sample of a Kineceleran from the planet Kinet.[merch 1]

XLR8 resembles a semi-armored Velociraptor. He has black orbs on his feet, a black tail with five blue stripes, and bulky claws on his 3 fingers that can only open and close. He wears a black cone-like helmet with a protective visor that slides over his face (that is part of his Kineceleran biology and not mechanical).[pop-up 1][2] When the visor is lifted, one can see his blue face, green eyes, black lips, and stripes running under and in between his eyes; the rest of his head's features are unknown. XLR8 has five blue stripes on his tail and wears a black bodysuit and turtleneck-like shirt with a white stripe on the center.

In Back with a Vengeance, XLR8 wore a yellow raincoat.

In Ultimate Alien and Heroes United, XLR8 looked exactly the same as he did in the Original Series, albeit his skin was slightly darker and he was more muscular.

In Omniverse, XLR8 is now taller and the white color on his shirt is replaced with green, which now covers his neck. The number of tail stripes have gone down to four, the black balls on his feet are bigger, and his visor is darker.

11-year-old XLR8 in Omniverse looks exactly the same as his 16-year-old self, except that he is shorter, and the green color of his shirt is white. He has three stripes on his tail.

In Rules of Engagement, XLR8 wore jewelry Fistina had stolen.

XLR8 wears the original Omnitrix/Ultimatrix/Omnitrix symbol on his chest.

Ben 10,000's XLR8 was taller and more muscular-looking than his 10-11/16-year-old self. His arms, legs and tail stripes were white instead of blue, and there were less stripes on his tail. XLR8's clothing had longer sleeves with a pair of stripes under the shoulders and has an arrow-shaped symbol on his lower torso. He wore the Omnitrix symbol on his chest.

Ken's XLR8 looked the same as 10-year-old XLR8 in the Original Series.

Gwen 10's XLR8 is more upright. Her face lacks the black markings that Ben's has, as they are replaced with freckles. She has pink eyes and Gwen 10's hair-clips, as well as a black helmet. The majority of her outfit is dark blue with a light blue section around her neck that goes down her chest in a V-formation, light blue stripes on her forearms and wrists, two light blue stripes on the end of her tail, and a light blue stripe on each of her legs where the outfit ends. Her visor now has pink markings, and her hands are more human-shaped with claws for fingers. She wears the Omnitrix symbol on her chest with a cat shape surrounding it. 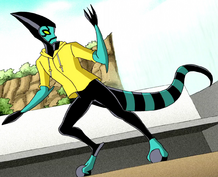 XLR8 in a yellow raincoat in Back with a Vengeance 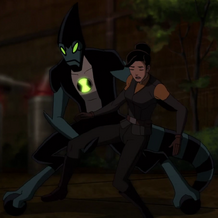 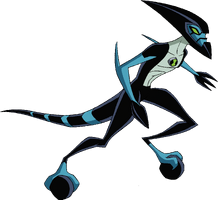 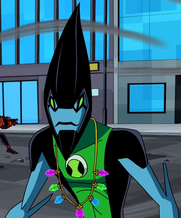 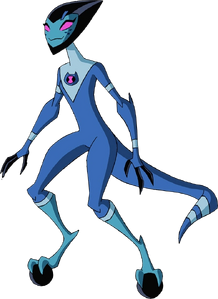 Using the orbs on his feet, XLR8 can reach running speeds of 500 miles per hour[merch 1] within two seconds. He can accelerate so quickly that time appears to completely stop to him, allowing him to change the positions of things around him mid-motion, while only being able to be seen by a camera with a very high shutter speed.[3]

XLR8 is capable of creating tornadoes by generating a centripetal vacuum powerful enough to lift a To'kustar[7], either by running in a circular pattern or spinning at supersonic speeds.[8][9] He can also combine this with water running to create water vortexes by running in front of[5] or around his enemies.[10]

Even without his orbs, XLR8 naturally has a very high dexterity, capable of thinking, acting and reacting at superhuman speed. His sharp reflexes allow him to dodge attacks with little to no effort,[11][12] and change direction very easily while running. He is able to type on keyboards or keypads at high speeds. When using this skill to bypass a multiple-digit code, he can think of and input every single possible combination instead of guessing, such as when he was trying to remove SevenSeven 23's bomb from Ben 23's arm.[13]

Compared to his fellow speedster alien Fasttrack, XLR8 seems to have more control over his speed; he can immediately end a run by stopping in place, while Fasttrack can have trouble stopping if he runs too fast.[14] Furthermore, he is implied to be faster than Citrakayahs[15][16] and confirmed to be faster than Aerophibians on the ground.[DM 1]

XLR8 can deliver attacks in rapid succession, such as excessively kicking, or stabbing with his claws. The strength of his attacks also get enhanced when he applies more speed to them.

XLR8's scissor-like claws can cut through many materials with relative ease.[17]

XLR8 has enhanced strength, as he was able to carry a multitude of people, including Gwen, to safety without slowing down at age 10.[5][8] However, technically speaking, XLR8 is physically weaker than Citrakayahs.[MW 1]

XLR8 can recover from injuries faster than any other species,[12] and is durable enough to withstand being thrown against a wall.[18]

XLR8's tail is prehensile, and can hold objects if his hands are full. This feat was first demonstrated when Kevin 11 used his tail to carefully pick up a tray of slop and shove it in Technorg's face when he wasn't looking.[19]

XLR8 is able to cling to surfaces, either due to his claws, his agility, or a combination of the two.[8]

XLR8 has the potential to become even faster with age, seeing how XLR8 was capable of travelling globally in just a few seconds when used by Ben 10,000.[pop-up 2][20] This also boosts his strength, shown when his XLR8 was able to greatly damage Exo-Skull with speed-enhanced physical attacks.[20]

XLR8 can make opponents dizzy to the point of falling unconscious by grabbing them by their arms and spinning them around in a circle at a fast pace; this feat was exclusively demonstrated by Helen on Gwen.[21]

XLR8's biggest weakness is magnets and charged pulses, as they can completely throw him off-course and cause him to lose his footing and spin out of control.[merch 1]

XLR8's speed does not work on all surfaces; running on ice can slow him down,[9] whereas running on mud leaves him stuck in place.[22]

Opponents with good reflexes and reaction time can counter XLR8's speed and land a blow on him, such as Transylians,[11] Tetramands,[18] and Vulpimancers.[25]

XLR8 is a playable alien in the game.

XLR8 is the third alien Ben obtains. The main thing players will need him for is to go to a lever, make him speed to it, and to the other lever to complete the levels. XLR8 has a Dark Heroes and a DNA Force skin. His Dark Heroes skin erases his visor, replacing it with a red robotic stripe.

XLR8 is capable of running at high speeds for a brief second, upwards or diagonally.

XLR8 has also used an exclusive ability only found in this game called: "Sonic Rush", where XLR8 breaks the sound barrier and creates a explosion, knocking all the nearby enemies away.

XLR8 is one of the aliens used by 10-year-old Ben.

XLR8's name is a gramogram of the word "accelerate", referencing his enhanced speed. A few translations of the show use a gramogram of their own, like the French "AXLR", but most others simply use XLR8 in the official dubbing, in their respective accent. However, XLR8 is gibberish in any language other than English, so it ends up making no sense.