Wreckingbolt is a hulking, broad-shouldered alien covered in black metallic armor with dark red pearlescent on his upper arms, claws, lower torso and legs and red armor plating on his back, shoulders, and head. He has thirteen golden spikes, five on his head, six on his back, and one on each forearm. His exposed face and forearms are mostly white, with glowing red eyes. He has four claws on both of his hands and grey lips.

As a toddler, Wreckingbolt still looks the same, but in a small size and lacks sharp teeth. 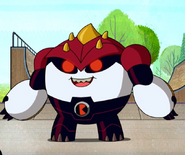 Being part-Arburian Pelarota, Wreckingbolt shares many of the same abilities as Cannonbolt, namely being able to curl into a sphere form, where he becomes motorized and is able to move at great speeds and increase his rotational momentum to slam into and/or run over enemies.

Due to Kevin's alterations to the Antitrix, however, Wreckingbolt is covered with an armor that increases his already powerful body. He is also most likely more powerful than Cannonbolt.

Wreckingbolt's spiked armor enables him to make more destructive crashes when in sphere form, as well as burrow underground.[1]

Wreckingbolt's shell is resistant to acids and lava, and is capable of deflecting lasers.

In ball form, Wreckingbolt appears to still be able to perceive the surroundings around him, despite his eyes being covered and encased inside his sphere form.

Despite his top heavy body, Wreckingbolt demonstrates enhanced reaction time, reflexes, dexterity and balance. This therefore allows for him to quickly swap in and out between his sphere form to suit his immediate needs.

Being-part Arburian Pelarota, Wreckingbolt shares many of the same weaknesses as Cannonbolt, namely being subjected to the physical laws of reflection and conservation of momentum that make it difficult for him to stop or change direction whilst picking up speed in sphere form.

Due to Kevin's alterations to the Antitrix, Wreckingbolt is too powerful for the inexperienced Kevin to currently utilize to the fullest. For example, his movements in sphere mode can easily throw him off balance simply by rolling too fast.[2]

Wreckingbolt has a durability limit, as he was knocked out from a punch by Shock Rock.[1]