Wildvine is a plant-like humanoid who has two arms with four fingers on each hand. His hands are covered with leaves. Wildvine has spikes on his hands and elbows. His hands and feet are dark green, and his body, arms, legs, and head are lime green. Wildvine has vines on his arms, and wrinkles on his stomach, neck, and a portion of his legs.

Wildvine has a large dark green leaf connected to his back and torso and has dark green lips. He has one blue eye, and a lime green leaf acting as a collar around his neck. He also has large, dark green seeds on his back. Wildvine wears the Omnitrix symbol on his chest.

In Ye Olde Laser Duel, Wildvine wore a green vest with blue orbs on his chest and shoulders and a fake brown mustache.

In Innervasion Part 3: Strange Bedfellows, the Omnitrix symbol was absent from Wildvine due to being used inside the Omnitrix.

Wildvine in a daydream 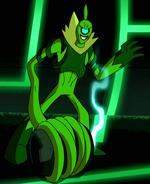 Wildvine can grow and retract his body. He can also grow vines to trap others, which appear to be his fingers coming off.

Wildvine is able grow vines tentacles on his back that be can be used as legs that supports his body.[2]

Wildvine is capable of elasticity and body alteration. He also has enhanced flexibility, agility, and digging.

Wildvine can grow seeds on his back that contain a whole host of substances (lethal and non-lethal). His seeds can also grow vines.

Wildvine is very agile being able to swing from tree to tree.[1] He can turn his arm into a large leaf that is able to scoop up dirt.

Wildvine possesses enhanced strength and is able to regenerate his body if it is damaged.[1]

Wildvine can grow thorns on his body and shoot them from his hands as projectiles.[3]

Wildvine's vines can be tangled. He can also be tangled up in his own vines.

Wildvine's vines are not indestructible, as they are only resistant to a certain degree and can be break apart by species with as much or more strength than a Tetramand, as demonstrated with Thornblade.[5]

Wildvine is a playable alien character in the game.

Wildvine is initially unavailable, but is unlocked at the beginning of the Funhouse level.

Wildvine is able to use the vines on his back to grapple himself to higher areas.

Wildvine's Ultimate Ability consists of him jumping in the air, using the vines on his back to rapidly pummel enemies and then as anchors to perform a dive bomb.

Wildvine is vital for progression on the Funhouse and Scrapyard levels of the game.

Wildvine is a playable alien in the game.