Wildmutt appears to be a large orange dog with no eyes, ears, nose, or tail. His posture and movements are also somewhat apelike. His teeth are very defined and stick out of his mouth. Since Wildmutt has no eyes, he uses his sense of smell and hearing to navigate, which are aided by three gill-like nostrils located on each side of his neck.

In the original series, Wildmutt wore a brace with the Omnitrix symbol on his left shoulder.

In Back with a Vengeance, he wore a yellow raincoat.

4-year-old Wildmutt looked very similar to his 10-year-old self, but a lot smaller and thinner.

10-year-old Wildmutt in Ultimate Alien was almost identical to his 10-year-old version in the original series, just with orange lips rather than black and the brace didn't have any white in it. The Omnitrix symbol was also recolored.

In Omniverse, Wildmutt has black lips, his forearms are a bit bigger and he now wears a green and white collar which contains the Omnitrix symbol.

11-year-old Wildmutt in Omniverse looks almost the same as he did in the original series, with the exception of the fact that the Omnitrix symbol on his brace is recolored to green.

At 30 years old, Wildmutt had grown larger, had stripes on his back as well as a tail, and his appearance had shifted to a more feline form. Wildmutt wore the Omnitrix symbol on his forehead. 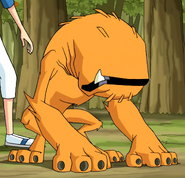 Wildmutt in a yellow raincoat

Wildmutt in Race Against Time

Wildmutt's main ability is his sense of smell. As he has no eyes, his "vision" is made up of a dull 3D mapping of where his senses originate, similar to a thermograph.[1] Combined with his enhanced hearing, his senses take the form of a radar or sonar, allowing him to still perceive his environment more clearly. His enhanced speed and reaction time allows him to dodge, evade, and counterattack effortlessly with the help of his senses.

Wildmutt can track almost anything and anyone by their scent.[2]

Wildmutt has superhuman strength, as he can rip off the roof of a car with ease.[3] Wildmutt can dig deep craters at a fast speed, even while digging through solid stone ground.[4]

Wildmutt has enhanced agility that allows him to run, jump and climb at an inhuman rate. He is highly acrobatic and gymnastic, with such movements being similar to that of an ape.[5]

Wildmutt is durable enough to survive a steel tower falling on top of him.[6]

Wildmutt is a quadruped. However, he is capable of standing on his hind legs, and he can punch, somewhat awkwardly, by doing this. In addition, his feet are prehensile, as he caught Gwen with his foot as she was about to be sucked into space.[7]

Even though this has never been shown, the porcupine-like quills on Wildmutt's back supplement his sonar and can also serve as weapons, either protecting him while he's rolling, or as projectiles fired off at will.

Wildmutt can't talk in human languages. Instead, he communicates through a combination of barking and snarling. Due to this, it is extremely difficult for anyone to understand him.

Wildmutt's senses are very sensitive, making him vulnerable to anything that can overwhelm his senses such as a high-pitched sound or a strong smell.[8][9]

Wildmutt's lack of eyes makes him completely dependent on his other senses (mainly olfactory).

When infected with a cold, Wildmutt's nostrils (on the sides of his neck) get blocked by mucus, making him unable to smell or hear and rendering him essentially "blind". In addition, his fur color seems to "decrease" from its vivid orange to a pale yellowish-orange tone, and his lips and claws turn from black to a sickly dark green hue.[10]

Wildmutt is a playable alien in the game.

Wildmutt is a playable alien in the game (by both 11-year-old and 16-year-old Ben).

Wildmutt can release a sonic attack capable of stunning enemies.