Have I Got a Deal for You

Whalium Whalace is a big, blue, whale-like alien. He has one big barnacle on his forehead and several barnacles on his legs and shoulders. His eyes are white. He wears a black and light blue colored suit with two black stripes on it.

His name is a play on Scottish knight Sir "William Wallace" and "whale". 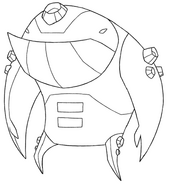 Add a photo to this gallery

Retrieved from "https://ben10.fandom.com/wiki/Whalium_Whalace?oldid=1039763"
Community content is available under CC-BY-SA unless otherwise noted.