Take over the Earth

Riding the Storm Out

The Weatherheads were a group of robots that first appeared in Riding the Storm Out.

The Weatherheads are robotic in appearance and resemble businessmen with white shirts and colored ties. Their heads resemble skulls and they have orange eyes. Shock-O is tall and lanky, having the thinnest yet longest skull, and has an orange tie. Hail-O is short and fat, having the shortest yet widest skull, and has a dark blue tie. Gust-O is the middle of the three, and has a light blue tie.

The Weatherheads in beach clothes

The Weatherheads in their emotional states 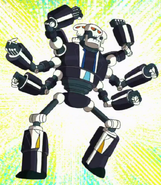 The Weatherheads fused together as one super-robot

The Weatherheads have a tendency to remark that they have no emotions, yet it is clear that they are programmed to have them, as seen with a 'on/off' button for their emotions. This can be exploited, as they were tricked by Ben into fighting each other. However, they all fear failing their leader Sunny.

When their emotions are turned on, each of them gain far more distinctive personalities. Hail-O becomes moody, cynical, whiny, and depressed, prone to crying fits and talking about everyone's insignificance in the universe. Shock-O becomes vain and haughty, fond of condescendingly mocking opponents and ad hominem, shown when he called Max's hair out of style, leading to him running away and crying. Gust-O becomes full of rage, prone to trash talk (calling Shock-O "coat rack") and losing his temper and then lashing out at the target of his frustration, even at his own allies.[1]

The Weatherheads first appeared in Riding the Storm Out, where they attempted to construct a weather-manipulating machine in order to create a galactic cyclone. They were defeated by Amalgam Ben, and were sent through the "cosmic cyclone" that they created, launching them into space.

The Weatherheads return in The 11th Alien: Part 2, where it is revealed that they were responsible for the unnatural weather occurring in the previous episode (initially believed to have been a consequence of Ben using the Omnitrix), partnering themselves with Vilgax. However, once they become convinced that Vilgax will betray them, they decide to turn on him - thus leading to their defeat by Shock Rock.

In The Feels, the Weatherheads, almost drained entirely of their battery, attempt to recharge by creating negative emotions via their usage on weather. Whilst their initial attempts of wreaking havoc initially work and recharge them (thus making them more powerful), they are once again defeated by Shock Rock and quickly run out of charge once more as the people happily rebuild their damage. This subsequently causes the Weatherheads to perform generous acts (under the influence of these positive emotions) and therefore malfunction and are forced to retreat.

In Beach Heads, the Weatherheads are seen at Tampa beach, where they attempt to create their new base. After a fight with Diamondhead, and later Cannonbolt, the Weatherheads begin to take in the positive emotions once more that they experience whilst battling the latter - this distraction subsequently providing enough time for Gwen and Max Tennyson to destroy their base and thus foiling their plans once more. The episode thus ends with them finally accepting the relaxation and enjoyment that they feel on the beach.

In Heat of the Moment, the Weatherheads are swiftly defeated by Cannonbolt at the beginning of the episode. It is this embarrassing loss (as well as the countless ones prior) that prompt them to accept Kevin's advice of accepting their emotions, in a last-ditch attempt at finally defeating Ben. Later on, the now-emotional Weatherheads attack Ben at the ski resort, utilising their newfound emotions to further enhance their own perhaps and swiftly defeat Four Arms. However, their fall comes during their battle with Slapback, where they become convinced (from the latter taking advantage of their emotions) to question their loyalty towards Kevin - thus prompting them to then chase an angered Bashmouth instead, continuing to attack Kevin after he transformed back into human form.

In Mud on the Run, the Weatherheads hosted a human to test human emotions because they though that there failed attempts were due to the lack of emotional understanding. After Jetray demolished their control tower and Omni-Kix Diamondhead defeated them, their manager Sunny appeared with intentions of having the Weatherheads return to space.

In Wind Some, Lose Some, the Weatherheads built Sunny a recharging station powered by wind turbines. While pursing the Tennysons, the Weatherheads were destroyed. Sunny retaliated by blasting the Rust Bucket before Omni-Kix Humungousaur blasted her with a powerful energy beam.

Each of the Weatherheads is capable of manipulating weather-based elements.

The Weatherheads are also capable of combining their abilities for more powerful attacks, like when Hail-O and Gust-O combined their powers to blanket a small town in snow, or even unleashing a gust of wind charged with lightning and littered with ice shards.

The Weatherheads are able to absorb negative emotions in order to recharge themselves.[2]

The Weatherheads' denial of their own emotions can easily be exploited by their enemies.

In the event that the Weatherheads perform acts that generate positive emotions, they will malfunction and shut down.

The name of this group and the names of its members are referencing specific elements of weather (thunder, gusts, hail).