The Frogs of War: Part 1

The Way Bads are a group of mutated To'kustars, who first appeared in The Frogs of War: Part 1.

Way Bads have the basic structure of any other To'kustar, but their skin colors are either a combination of gray and red, or gray and purple with black markings on their lower arms. Way Bads also have red eyes. They wear outfits and armor that vary almost entirely from Way Bad to Way Bad, and unlike a pure To'kustar such as Way Big, the random nature Psychobos' mutation means that some have more reptilian appearances, blades in varying places, and some of them are skeletal, have bones showing, or have bizarre scars. One of them had large red bulbs over most of its body. 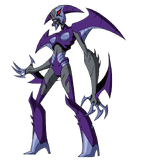 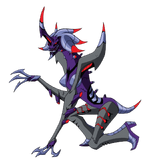 Unlike normal To'kustars, who are normally benevolent and calm, Way Bads are feral without Dr. Psychobos' control, destroying everything in their sight.

Way Bads were created by Dr. Psychobos from To'kustar DNA,[DJW 1] but due to their feral nature, he controlled them using the mind control serum he developed on Revonnah.

The Way Bads first appear in The Frogs of War: Part 1 in Bellwood. They were going across other parts of the Earth assuring the Incurseans' rule.[1]

In The Frogs of War: Part 2, Ben and the Plumbers managed to break Psychobos' control over the Way Bads, causing them to go on a rampage. Fortunately, they managed to transport all of the Way Bads to the Null Void.

In Weapon XI: Part 2, Ben, Gwen, Rook, Zed and Argit encountered several Way Bads in the Null Void. Gutrot created a pheromone to attract them to the Rooters' base and prove instrumental to their ultimate downfall. After the Rooters are stranded in the Null Void, a Way Bad is shown confronting the disgraced Plumbers.

Like normal To'kustars, Way Bads have extraordinary strength and durability. They also can blast strong cosmic rays by crossing their wrists together.

Way Bads can be harmed by Argit's quills.[2]

Way Bads can be harmed by high-pitched noises, such as a Sonorosian's sonic screams, if they were to get close enough to their ears.[DJW 2]

Way Bads are vulnerable to the To'kustar predator, an unnamed virus.[DJW 3]

In Ben 10: Omniverse 2, Way Bads can release a powerful scream that only heavy class Omnitrix aliens can withstand. In the 3DS version, Way Bads can shoot lasers out of their eyes.