Vulkanus is a Detrovite criminal who utilizes a large mechanical suit to make up for his small regenerative size.

Vulkanus, like other Detrovites, has orange skin along with large jaws with the teeth merged with the lips. He also has two brown horns extending downward from his jaw. Vulkanus changed robotic suits throughout the series; in the original series, he wore a red suit with spikes that showed off some of his chest.

In the future, Vulkanus looks exactly like he does in the original series, except his suit is dark yellow instead of red.

In Kevin's Big Score, he wore a greyish blue suit that covered him from the neck down that also lacked spikes.

From Season 3 of Alien Force to Ultimate Alien, he wore the same suit, except it was just blue.

In Omniverse, the horns resemble batwings and are grey, and his suit has a different pattern to it and now has cylinders on it. His lower jaw is larger, as are his ears, which are now pointed. He also has a shovel attached to the back of each hand.

In an Omniverse flashback, Vulkanus looks exactly as he does in the original series, except for the fact that he has a slightly darker skin tone, the horns that are on his face are smaller and colored black instead of brown, and his ears are pointier. He then wears the regeneration suit that he wore in Alien Force and Ultimate Alien, but he does not retain the flashlight on his head.

Vulkanus five years prior to Omniverse

Vulkanus after his body got destroyed

Vulkanus wearing his regeneration suit five years prior to Omniverse 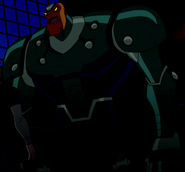 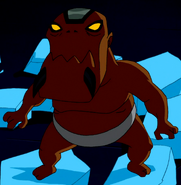 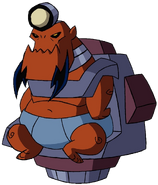 Vulkanus is a teasing, short-tempered and cunning criminal who does whatever it take to make a profit, even if it means going against the will of others. For example, when he forcefully made Kevin absorb a piece of Taydenite to turn him into an unlimited living Taydenite supply, he planned to "sell him off piece by piece".[1]

Vulkanus does whatever he can to make sure no one else gets his priceless gems, as he usually tries to kill Ben and the team whenever he encounters them, showing that he is cruel and violent.

Although he prefers to work alone, Vulkanus does not mind working with others, as he has teamed up with SixSix,[2] Zombozo, and Charmcaster.[3]

Vulkanus has a twisted sense of humor, as seen when he laughed in between cheering on a Techadon Robot battling Ben and the team.[4]

Despite his violence, Vulkanus can still be cowardly, seen when he begged for mercy at the hands of Ultimate Big Chill.[3]

In Perfect Day, Vulkanus appears in Ben's dream, working alongside SixSix again. He is defeated when Gwen uses her spells to trap him in a dumpster and shrink him down to a harmless size.

Vulkanus attacked Mr. Baumann's store, with the purpose of stealing a vial of Element X that he brought for Sheelane. He follows Baumann to the subway (which used to be a mine) where he falls into a pit after Baumann tricked him. Later he found Baumann at Sheelane's lair, he took the crystal and Sheelane as a hostage.

However, Diamondhead freed Sheelane and he replaced the old Element X which he attached to Vulkanus' back with the new one. Diamondhead used a crystal wall to protect himself, Sheelane, Max, and Baumann and to make Vulkanus hit the roof of the cavern. The iron ore of the cavern interacted with the Element X on his back, which caused an explosion.

While everyone thought he died, Vulkanus survived the explosion, but his body was blown to bits. With the remainder of his body having a slug-like appearance, he crawled through the mine until he found his servants who put him into a regeneration suit.

At some later point, Vulkanus was betrayed by Kevin during a "counterfeit isotope" scam a few years earlier. Kevin left him holding the merchandise when the Plumbers arrived, and though he managed to escape, the Plumbers destroyed his ship. Unable to leave Earth, he resorted to trading level three alien technology to get by.

In Kevin's Big Score, when Kevin arrives looking to obtain an important item (a holo-viewer from Max Tennyson), Vulkanus decides to get back at him for the betrayal by forcing Kevin to absorb a small piece of Taydenite, the rarest living gem in the galaxy. This causes Kevin's body to mass-produce the gem, thus giving Vulkanus an endless supply. However, he is foiled by Big Chill, who freezes off his suit, revealing that Vulkanus hasn't managed to grow his old body back. Rather than attempting to arrest him, Kevin leaves Vulkanus with the Taydenite he had managed to chip off beforehand, considering it payment for his past actions.

In Inferno, it is revealed Vulkanus had used the Taydenite he gathered from Kevin to purchase the Earth and turn it into his home by pumping the magma out of the mantle in order to detonate a bomb, which will raise the Earth's surface temperature to 800 degrees. The bomb is stopped by Ben and Kevin is happy that Vulkanus wasted his money.

In Con of Rath, when Rath, Gwen, and Kevin discover they need Taydenite to power their ship, Gwen tells Kevin that every time they come across Taydenite, they run into Vulkanus. Kevin says that she is imagining things, they are confronted by Vulkanus. Kevin tries to negotiate with Vulkanus using a gold credit cube, but Vulkanus holds firm, saying that the three of them were on his planet without any other transactor in the vicinity. He is defeated by Rath, who ruined most of his Taydenite. Beaten, Vulkanus is forced to hand over his remaining Taydenite.

Vulkanus appears as one of the villains after Ben in Hit 'Em Where They Live, teaming up with Zombozo and Charmcaster. Vulkanus is beaten at the end by Ultimate Big Chill.

In Absolute Power: Part 1, Vulkanus was beat up by Humungousaur because he wanted answers about where Ultimate Kevin was.

In Greetings from Techadon, Vulkanus bought a Custom Techadon Factory to destroy Ben, only for Ben to discover how the Techadon were tracking him, and prevented them from doing so. This angered Vulkanus and he states that he wasted "enough to buy a whole solar system" for the defunct factory. Ben then uses Kevin's old ID Mask to put a fake Ultimatrix symbol on his back, causing one of the Techadon to begin chasing him instead of Ben. He flies away, screaming that he wishes he could hate Ben to death.

Vulkanus returns in Special Delivery where he tries to be the first to gather the dwarf star that was unintentionally in Ben's possession. However he was defeated, alongside Fistina, by Humungousaur.

He returned in The Ballad of Mr. Baumann, to take his revenge on Baumann and to steal Sheelane's Element X. He dived into Sheelane's lake where he ordered his servants to disassemble her ship. He later battled Ripjaws who destroyed his suit and defeated him by creating a whirlpool.

In Ken 10, Vulkanus (with a fully recovered body) is defeated by Ben 10,000 and gets transported to the Null Void.

Being a Detrovite, Vulkanus is naturally resistant to extreme heat and is immune to lava.

Vulkanus can survive underwater and in the vacuum of space.[5]

While inside his mechanical suit, Vulkanus has superhuman durability, enough to easily shrug off lasers and survive being blown into nothing but a head by Element X.[5]

Vulkanus is usually equipped with a hand blaster that shoots energy, usually a fire like beam. He also has his mining workers to fight with him and admits that he is "stinking rich".[4]

Vulkanus has a pair of rocket boots that enable him to fly.[4]

Vulkanus has shoulder-mounted rocket launchers on his suit.[5]

Because of his injuries, Vulkanus wears a regeneration suit that is incredibly durable and gives him enhanced strength.

Vulkanus' regeneration suit has a drill hand built into it.

Without his suit, Vulkanus is about the same size as a human baby and is relatively defenseless.

Vulkanus comes from Vulcan who is the Roman god of smithing and flame.