The Vilgax Actor is a Human actor contacted by Albedo to play the role of Vilgax in "Ben 10 Live".

His costume is like a fusion between the first appearance of Vilgax and his cybernetic form, with gold shoulder pads, red sleeves, black gloves and torso, and red eyes.

Under the mask, he is blonde, with brown eyes. 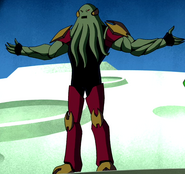 Vilgax Actor in his costume