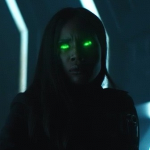 Hey guys. Fan of Ben 10 here. I enjoy watching Ben 10 though I have to say my favorite Ben 10 series were the original and the Alien Force. Ultimate Alien, to me, isn't all that great and is too different from Alien Force. It makes no sense to me and I think the creators are running out of ideas, BUT I have heard that a lot of the episodes have been 'fillers'.

Anyway, things have changed now; I'm here to edit and my grammar, spelling, has become a lot better. So not only will be adding photos, but possibly making a lot of edits, fixes, and corrections. I have no problem with taking requests to add photos up. So if you need any images just request and I'll see if I can upload them. Just state the episode it's in.

When uploading photos unto the wiki, instead of uploading JPG files, upload PNG files. JPG files tend to compress the quality of the photo (the pixels are more visible), which makes it appear a little different from PNG files.

Gwen- She's so strong and I think the creators underestimate her sometimes and make her a major damsel in distress. She has numbers of powers and abilties; yet she seems to constantly get knocked out or in 'grave' danger when her sheilds blow out...then Kevin and Ben have to jump in the way to either save or defend her. She needs to glorified more.

Kevin- I find Kevin's powers really remarkable. On how he can absorb so much, and do so much with it. Besides, his personality is really funny. He's a jerk and all, but it's the thought that counts.

Retrieved from "https://ben10.fandom.com/wiki/User:JuniperAlien?oldid=287639"
Community content is available under CC-BY-SA unless otherwise noted.