Upgrade was the Omnitrix's DNA sample of a Galvanic Mechamorph from Galvan Prime's moon, Galvan B.

Upgrade is a black humanoid comprised of liquid metal, with a violet torso and thighs. He has purple stripes that extend from his body, resembling circuitry and a singluar eye in shape of a circle. Upgrade wears the Omnitrix symbol on his chest.

As a sumo in Ben's imagination in Cutting Corners, he has the build of a sumo. The violet part of his body is T-shaped.

As a toddler, Upgrade looks the same except he is in smaller size. 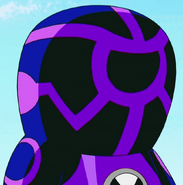 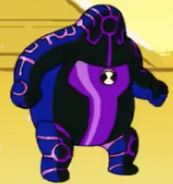 Upgrade as a sumo in Cutting Corners

Upgrade is not completely solid, as he can alternate between the forms of a liquid and a gelatinous being. Due to this, he can reshape himself to let projectiles or blows pass through him by creating a hole in his body at will.

Upgrade can use his internal nanotechnology to merge with and possess any technology by encasing himself over it. The size of the device is not significant and he controls it as naturally as he would his own body. Whenever he merges with technology, he upgrades it into something far more advanced and futuristic, causing new features to form on it.

Technology does not seem to be the only thing Upgrade is able to merge and enhance with, as he once merged with a suit of armor[2] and a skateboard.[3]

Upgrade can also mimic technology and has a vast library of schematics to draw upon.[DR 1]

Possessing technology allows him to transform it with seemingly no limit, such as merging with the Rust Bucket and turning it into a space ship. The moment he un-merged with it, it returned to normal.

Upgrade is capable of making certain technology he possesses explode. Due to being made of living metal, he is able to regenerate himself.[4]

Upgrade can make his head or face appear anywhere on the machines he possesses.

Upgrade possesses enhanced reflexes and flexibility allowing him to dodge attacks with a little effort.

When merged with machinery, Upgrade's strength is increased, strong enough to overpower and toss opponents.

Upgrade was able to upgrade the Omnitrix to permanently enhance his other aliens.[1]

Being inorganic, Upgrade is able to survive in the vacuum of space, as demonstrated by Bootleg.[5]

Being living metal, Upgrade is vulnerable to electricity,[6] such as that generated by a Fulmini, as demonstrated with Bootleg.[7]

Upgrade is vulnerable to fire.[8]

Upgrade is sensitive to electromagnetic pulse/fields and magnetic fields.

As a toddler, Upgrade cannot completely merge with technology but could if he was stretched long enough.[9]

Upgrade can sustain damage from attacks on whatever object or technology he is merged with, as demonstrated with Bootleg.[10]

Upgrade is a playable alien character in the game.

Upgrade is initially unavailable but is unlocked towards the middle part of The Scrapyard level.

Upgrade is able to stretch his arms to inhuman lengths, turn into a puddle of slime and shoot a purple energy beam from his eye.

Upgrade's Ultimate Ability consists of him unleashing a devastating eye beam at enemies.

Upgrade is not required to be used at all in order to complete the game.