Upgrade has a black exterior with green stripes that resemble circuitry all over him. The green circle on his head is his eye, which glows whenever he talks. His body is made up of billions of small cell-like creatures called nanites.[pop-up 1][2]

In Destroy All Aliens, Upgrade looked the same as he did in the original series except he had more of a metallic texture, giving the appearance of a computer's screen with circuitry patterns within.

In Heroes United, Upgrade looked the same as he did in Ultimate Alien except his green circuitry stripes glowed yellow. His Ultimatrix symbol was also not visible until he merged with Rex.

11-year-old Upgrade looks exactly the same as he did in the original series, except his neck is slightly longer and the Omnitrix symbol on his chest is recolored green.

Max's Upgrade looked exactly like Ben's did in the original series, but was far more muscular and slightly taller.

Upgrade in a yellow raincoat in Back with a Vengeance 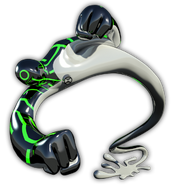 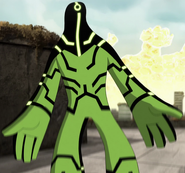 Upgrade is completely amorphous as he can switch between liquid and bipedal form. The nanites that makes up his body allows Upgrade to reshape and move like liquid even though he's a solid being.[pop-up 2][2] Due to this, he can reshape himself to let projectiles or blows pass through him by creating a hole in his body at will. His physiology also makes him extremely flexible. Upgrade's shapeshifting abilities allow him to grow technological spikes and tentacles, even when merging with technology.

Upgrade can alter his body shape to match or mimic the body structure of another species, such when he morphed into a Tetramand and grew an extra pair of arms.[3] He can also alter his own size, as demonstrated by a Mechamorph Guard.[4]

Upgrade's DNA is "programmed" with blueprints of every alien technology,[pop-up 3][5] allowing him to merge with and possess any technology by encasing himself over it. The size of the device is not significant and he controls it as naturally as he would his own body. When he merges, he enhances the technology into "ultra-tech",[merch 1] making it far more advanced and futuristic beyond human capability, causing new features to form. After he separates from a machine, it returns to normal.

Upgrade's technological possession can work on non-electrical machinery, such as a row machine in a gym.[6] This ability extends to even sentient beings that are mechanical in nature, like Chronosapiens[7][8] and probably Nanochips.[DJW 1]

Upgrade can reconfigure technology to suit any situation, like transform the Rust Bucket into a battle armor, with an arsenal of heavy energy weapons, or even retractile robotic manipulator arms.[9]

Possessing technology allows Upgrade to transform it with seemingly no limit, such as merging with a baseball pitching machine and turning it into a tripod-like robot that fires a seemingly infinite amount of baseballs.[10]

Upgrade can make his head or face appear anywhere on the machines he possesses.[11]

Upgrade can merge with organic beings, such as Rojo[6] and Rex,[11] as long as there is machinery integrated within them.

Upgrade can enhance certain devices, such as Rook's Proto-Tool, just by touching them.[12]

By energizing his biomechanical blood,[pop-up 4][2] Upgrade can launch a powerful green plasma blast from his eye.[13][14][15]

Upgrade can form energy constructs such as an energy spike and can generate a beam of light that can harm an Ectonurite,[15] though mostly while merged with machinery and upgrading them into weapons.[16]

Upgrade can travel through electrical currents[17] and phase through most technology.

Upgrade can reshape his body to resemble a parachute in order to gently descend and glide through the air before landing safely.[18]

Being inorganic, Upgrade is able to survive in the vacuum of space.[14]

Due to being made of living metal, Upgrade is able to regenerate himself.[3]

Upgrade possesses enhanced strength, being able to throw a sewer lid at a Megawhatt,[13] push Vilgax off of a ship,[18] and overpower Viktor.[14]

Upgrade is durable enough to withstand a blast from the Proto-Tool without physical damage.[12]

Upgrade can generate electrical charges capable of shocking his opponents into submission.[5]

Upgrade can separate and release a part of him into technologies and control them without fully merging to them.[12]

Due to being technological, Upgrade possesses digitalized vision.[16]

Upgrade can repair damaged machinery with ease and come out unscathed, as demonstrated by Azmuth when he used the Retaliator Armor to repair the Rust Bucket by absorbing its remains into itself and reassembling them.[3]

Upgrade can turn his hands into weapons or tools, such as maces[2] and a flashlight, the latter of which has been demonstrated by several Mechamorph Guards.[19]

Upgrade can extend parts of his body into cable or hand-like structures, as demonstrated by Malware.[20][21]

Having a vast library to draw upon, Upgrade may be able to mimic and shapeshift into technology[DR 1] and non-electrical items, as demonstrated by Ship[22] and a Mechamorph Guard.[4][note 1]

Upgrade's control over machines is not absolute, as sapient, intelligent machines like Slix Vigma can easily fight off Upgrade if he merges with them against their will.[23] He may also be unable to override existing security systems, such as those of the Megacruiser[23] or Plumber Headquarters.[24]

Upgrade is sensitive to electromagnetic pulses/fields and magnetic fields.[25]

If he is being continuously attacked, Upgrade cannot regenerate himself.[15]

Despite his enhanced durability, Upgrade is weak against acid[AC 1] and intense heat such as lava.[DJW 6] This is because any sort of corrosive can upset his delicate chemistry.[merch 1]

Being a swarm of nanomachines, Upgrade is weak against electricity, such as that generated by Nosedeenians[13] and Conductoids, the latter of which has been demonstrated with Malware.[26]

Upgrade can be encased by Petrosapiens, as also demonstrated with Malware.[20]