Upchuck is the Omnitrix's DNA samples of the Perk and Murk races of Gourmand from the destroyed planet Peptos XI and currently Peptos XII.[2][DJW 1]

Perk Upchuck has green skin, six sprout-like growths on the back of his head, a dark-green patch of skin on his head, light-green skin on his face and belly and a crooked teeth overbite. He has whisker like lines on his face, and a green tail.

In the original series, Perk Upchuck had white eyes and wore a black open-front suit with white over-sleeves and white bands around his legs and white padding under his three-toed feet. He wore the original Omnitrix symbol on his left hand.

In Omniverse, 16-year-old Perk Upchuck does not wear clothes and his eyes are recolored green. He wears the Omnitrix on his stomach.

11-year-old Perk Upchuck looks almost the same as the original series, but his eyes and original Omnitrix symbol are recolored green and he now has bare feet with short claws.

Murk Upchuck has swampy-green skin, a tanned stomach and muzzles, black sprouts and black-green spots on his tail, limbs, and back. His eyes are sharp and green, he has whisker-like lines, his teeth are more aligned with visibly sharp canine teeth and his tail is short and straightened, as opposed to Perk Upchuck's curled tail. Gwen as Murk Upchuck shares these traits.

In Heroes United, Murk Upchuck's black stripes on his face were longer, reaching his mouth, and he only had two lines instead of three. His claws were attached to his hands through finger stubs.

In Omniverse, Murk Upchuck resembles his previous design, except that his claws are longer and bigger, his sprouts are brighter, and he has less spots on his body. He now has only two teeth in the shape of an underbite, and the markings on his face are thinner and contained by the face, no longer spanning the head.

Murk Upchuck wears the original Omnitrix/Ultimatrix/Omnitrix symbol on his stomach.

Mad Ben's Perk Upchuck has skin coloring that looks more like that of a Murk Gourmand. His teeth are now mirrored, and he wears a black helmet with a spike and orange glasses on it and spiked shoulder pads that are connected. He has orange bandages around his wrists, the spikes on the pads are orange, and the strap connecting the pads goes around the Omnitrix, which is on his chest. His eyes and Omnitrix are orange. 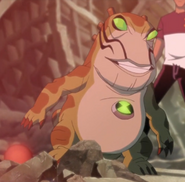 Both Upchucks have three very strong, adhesive tongues that can stretch to great lengths, allowing them to latch onto large objects and reel them in with relative ease. They can eat virtually any object or matter all the way up to Ascalon.[DJW 2]

Besides objects and matter, both Upchucks can eat other beings such as tigers,[3] Crabdozers,[1] To'kustars,[DJW 3] and even Celestialsapiens.[DJW 4]

Both Upchucks' mouths can stretch, allowing them to swallow objects larger than themselves. They are connected with a trans-space bladder dimension where they store all the "food" they eat. Both Upchucks are connected to the Gourmand species and can sense any danger to their people through their stomachs.[3]

By breathing air out of their mouths, both Upchucks are able to fly and even survive in the vacuum of space, as demonstrated by various Gourmands.[3]

The items ingested by either Upchuck are converted into explosive balls of liquids that can be expelled with great accuracy.[note 1] The explosive power of these "loogies" depends on the chemical composition and overall size of what Upchuck ate to create them.[pop-up 1][5]

Both Upchucks can carry heavy objects in their stomach, such as the Alpha Nanite's container, and release them without having to turn them into a "loogie."[6]

Both Upchucks can make their "loogies" curve like a boomerang, shuriken, or Frisbee. They can also fire powerful streams of their explosive vomit like an energy beam by building up digested matter and releasing it all at once.[8]

Either Upchuck is able to take a surprising amount of punishment for a creature of their size, taking the force of a moving car impact, as well as surviving after being thrown through a wall.[9]

Both Upchucks can spit out slime, which can be slippery for Arburian Pelarotas. This slime is also capable of melting ice.[10]

Both Upchucks have a limit to how many big objects they can swallow at once. They also become slow and excessively when they eat a lot of things. Otherwise, they are somewhat quick, considering their small size.

If either Upchuck does not spit out something they eat, they will get very fat and rendered immobile until they spit it out.[11]

Upchuck cannot eat Ultimate Panuncians as they would simply thrash in his stomach until he regurgitates them safely.

There is a limit to the kinds of energy either Upchuck can ingest, as the energy beams of an Evolved Galvan made them inflate into a ball.[12]

Either Upchuck can be temporarily immobilized by a Necrofriggian's ice breath until they thaw themselves free using their slime.[10]

Despite being able to eat a Celestialsapien, neither Upchuck can gain the latter's powers in any form or way.[DJW 5]

Perk Upchuck is a playable alien character in Protector of Earth; he is unlockable with a cheat on the DS version. He deals heavy damage to regular enemies and mini-bosses, but not to boss enemies.

Murk Upchuck is a playable alien in the game, replacing both Alien X and Cannonbolt in the Nintendo DS version.

Due to the Omnitrix rebooting after Ben's abuse of the quick change feature during his battle against Vilgax's forces, Murk Upchuck was temporarily locked until Ben's arrival in the Null Void, where both Murk Upchuck and Jetray are re-unlocked.

Perk Upchuck is a playable alien in the game (by 11-year-old Ben only). He is an exclusive for the DS and 3DS version.

Perk Upchuck is a playable alien in the game (only on 3DS).

Upchuck's name is a pun of the verb "upchuck", which means to vomit, referencing his abilities.

The Perk prefix is named after Tom Perkins, who design Upchuck's appearance in the original series.[DJW 6][DJW 7]

The Murk prefix is named after Glen Murakami, who redesigned Upchuck for Alien Force and Ultimate Alien.[TP 1][DJW 7]