The Ultimatrix is a recreated Ultimatrix-like device created by Albedo. It is only a stabilizer, instead of a DNA-altering device. Albedo created it as since Double or Nothing, he couldn't stay in alien form for a considerable amount of time.

This Ultimatrix looks a lot like the original Ultimatrix but half the size, as it only goes up to the user's wrist instead of half of their arm. It is worn on the back of the hand rather than the wrist. This Ultimatrix is also missing the previous Ultimatrix's black button and wrist couplings. Before it took this form, it resembled the Omnitrix, except red instead of green, however, it was smaller and lacked the stripes. It was originally green until Albedo inserted a device into it.

All of the aliens in this Ultimatrix (except Albedo's true form and the Ultimates) have the same appearances as Ben's aliens in his Omnitrix (albeit with color differences and mirrored clothing). 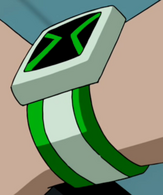 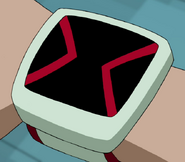 The Ultimatrix was created by Albedo to stabilize his transformations.

While posing as Ben, Albedo made no use of it and claimed he was simply getting combat training in his human form. When he, Rook, Fistina, Solid Plugg, and Argit stormed a Techadon hideout, Albedo transformed into Wildvine and restrained them, shedding his disguise.

Prior to a brief fight with Weapon Master Number 13, Albedo claimed a Polymorphic crystal was needed for "Ultimate power". After a fight with Ben, Albedo inserted the crystal into the Ultimatrix, changing its appearance from that of the Omnitrix to a form similar to the original Ultimatrix. Albedo then displayed his use of the Ultimate Forms and later used the device to assume his normal Galvan form, but following that, he assumed his own Ultimate form.

After Albedo was defeated, Azmuth modified his recreated Ultimatrix, so he was not only transformed back into being an imperfect clone of Ben but was also transformed into an 11-year-old, much to Albedo's dismay.

Albedo continued to use the Ultimatrix to work with Vilgax on two occasions, to destroy all the Bens across the Multiverse and to take over Galvan Prime. The Ultimatrix was eventually disabled by Azmuth,[2] who salvaged a few usable parts and destroyed the rest.[DJW 1]

This Ultimatrix has access to only aliens Ben has unlocked as of Double or Nothing, including every alien available to him during the original series.[DJW 2] The ones seen or implied on-screen are as follows: