Thumbskull is a member of the Circus Freak Trio.

Thumbskull is a massive, bulky figure with a massive nail on his forehead. He wears black overalls over a gray shirt with several black stripes on each arm. His skin is pale and he has black shoes with blue soles. 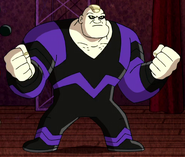 Thumbskull first appeared in Zombozo-Land, where he and the other members of the Circus Freak Trio were helping Zombozo execute his plan to enslave the world with his Hypno-Tower. He was defeated by Cannonbolt.

He later appeared in Vote Zombozo, to rob a bank while Zombozo hypnotizes a town filled with people. He alongside the rest of the circus trio were convinced to quit working for Zombozo by Four Arms.

Thumbskull is known for being the bulkiest member of the Circus Freak Trio. His great strength can even rival some of Ben's aliens.

Despite his great strength, Thumbskull has lackluster intelligence that can easily be exploited by his opponents.