Tetrax Shard[pop-up 1][1] was a Petrosapien mercenary, now changed into a remover of evil in the Milky Way.

In the original series, Tetrax shared his appearance with Diamondhead, save for not always having his back spikes exposed, as well as having green eyes instead of yellow. He wore a shiny grey suit that had a retractable black helmet, which housed a green triangle on the front. Under the helmet, the suit went all the way up to the bottom of his neck. This triangle was also on the center of his utility belt, and there were markings resembling it on either shoulderpad.

In Alien Force, Tetrax retains his resemblance to Diamondhead, although he lacks the Chromastone armor. His suit is now completely blue, with a black stripe going down the center, and black boots. He no longer wears a utility belt, instead housing pouches across his waist as if he did have one. His shoulders now fully bear his triangle insignia from his helmet. His armor under his helmet no longer goes up to his neck, instead somewhat revealing the upper part of his chest.

In Destroy All Aliens, Tetrax looked like he did in the original series, but his eyes had jewel-like facets. 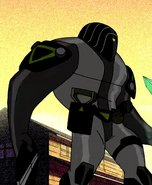 Tetrax with his helmet in the original series 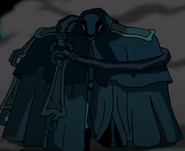 Tetrax in disguise in Secret of the Omnitrix 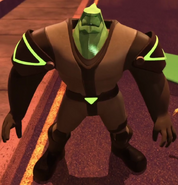 Tetrax in Destroy All Aliens

Tetrax with his helmet in Destroy All Aliens

Tetrax with his helmet in Alien Force

Tetrax is a battle-hardened bounty hunter with a strong desire to do what is right. This is partly due to his involvement in the destruction of his home planet, Petropia.[2]

Tetrax claims that he used to be a being who cared about no one but himself and that is what led him to become a mercenary. It was only after Vilgax destroyed Petropia that he realized the effect his actions had on his own people. That experience made Tetrax into the heroic Omnitrix guardian he became.[2]

Upon first discovering that Ben Tennyson has the Omnitrix, he laments the fact that out of the planet's six billion inhabitants, the Omnitrix ended up on the wrist of a child. He also berates Ben's lack of strategy in regards to its use. After helping Ben to defeat the other hunters, during which Ben learns to use the Omnitrix strategically, he decides that the Omnitrix is in good hands, allowing it to remain with Ben.[1]

Tetrax helps Ben become a better hero, teaching him to use the Omnitrix wisely. Ben later repays him by reviving the people of Petropia.[3]

Tetrax deeply despises Vilgax due to their history.[2]

As a being who cared about no one but himself, Tetrax became a mercenary and ended up hiring himself to Vilgax. When he finished the job Vilgax gave him, Vilgax created a weapon (using the crystal Tetrax stole) and used it to destroy Tetrax's home planet, Petropia, when his people would not bow down to him.[3] This caused Tetrax to betray his former employer and join a team dedicated to stopping Vilgax at all costs.[pop-up 2][2]

He also dedicated his life to learning everything about the Omnitrix.[pop-up 3][2]

Tetrax first appeared in Hunted under the alias of "Hoverboard" where he competed against Kraab and SixSix to obtain the Omnitrix from Ben. He later assists Ben against the other two bounty hunters and saves Gwen and Max.

Tetrax returns in Ben 10: Secret of the Omnitrix. Tetrax arrives on Earth after receiving the Omnitrix's SDM (Self Destruct Mode) signal, and takes Ben aboard his ship in search of Azmuth, the creator of the Omnitrix and the only one who can deactivate the self-destruct function. Unfortunately, Tetrax's problems are multiplied when Gwen stows away aboard his ship, and Ben's transformations are revealed to accelerate the countdown.

On Incarcecon, Tetrax runs into SixSix, another of the bounty hunters hired by Vilgax who ended up on Incarcecon. After a brief battle, he and the Tennysons find Myaxx, Azmuth's former assistant. Because of her, Tetrax is forced to reveal that the Omnitrix's explosion will create an energy ripple that will destroy the entire universe. Tetrax then leads the group to Azmuth's compound on Xenon, where he faces SixSix again before defeating him by delivering a punch to the face.

Tetrax appears in Ben 10: Destroy All Aliens, where he arrives to Earth to find Ben after picking up a signal from the Omnitrix. He locks Ben from reverting back into normal for his own good and is also sucked into the Omnitrix with Gwen, where they are attacked by a swarm of Vulpimancers. Tetrax manage to escape from the Omnitrix through Gwen casting a spell that teleports them away, but Tetrax and Max are forced to fight Ben's parents when they are transformed by the Omnitrix into a Pyronite and a Vulpimancer. Fortunately, the Retaliator Armor merges with the Omnitrix and Gwen casts a spell that transforms Ben's parents back. Tetrax, Azmuth, and the latter's father hide elsewhere to avoid being sighted by Carl and Sandra. Later on, Tetrax leaves Earth.

Tetrax reveals that Chromastone is the only one who can restore Petropia and his people back to life. He explains that the crystal he stole and gave to Vilgax (who used it to power the weapon that destroyed Petropia) was in fact a crystallized back-up for both his planet and its people. Upon discovering this, Tetrax stole the crystal back from Vilgax and gave it to the freed Chromastone so it could use the crystal to restore Petropia. This was Tetrax's way of atonement for his part in Petropia's destruction.

Angered that someone would use "his crystal" to restore a dead world, Vilgax beats Chromastone, who pleads for mercy, only to find Vilgax has none to give. Tetrax, Ben, Kevin, and Gwen arrive to see Vilgax beating Chromastone. Tetrax attacks Vilgax, but Vilgax's shield protects him from the crystal projectiles.

To Tetrax's horror, Vilgax removes the crystal from Chromastone before he can revive the Petrosapien people. However, Vilgax discovers the crystal power is gone, leaving it no longer useful to him. Vilgax flies off in disappointment, leaving behind the dying Sugilite. All hope seems lost, but the dying Sugilite generates a new backup crystal and hands it to Ben before fading away. Unsure of how to use the crystal, Ben transforms into Diamondhead, who instinctively knows how to use it and restores the Petrosapiens to life.

Tetrax and a revived Chromastone (who is revealed to be Sugilite) thanks Ben for his help. Tetrax decides to give Ben and company a ride home. Before leaving, Tetrax says he plans on settling the score with Vilgax (aware that both Petropia and the universe won't be safe unless Vilgax is stopped for good). When Ben thanked him for the ride back to Earth, Tetrax said that it was the least he could do.

Being a Petrosapien, Tetrax's body is made of organic, nearly indestructible diamond-like crystals that can refract light, causing him to be immune to most energy weapons.

Tetrax has a limited ability to regrow lost limbs, as well as alter his own physical constitution, making him able to do things such as fire crystal fragments as projectiles, turn his hands into blades, create structures out of his crystals, etc. He's shown to be much more skilled with his powers than Diamondhead.

In addition to his natural powers, Tetrax is an experienced bounty hunter with excellent fighting and strategy skills. Tetrax is also shown to be highly knowledgeable in regards to various advanced technologies, including a great understanding of how the Omnitrix works.

Tetrax was able to reprogram the Omnitrix.[4]

Tetrax has nearly impenetrable gray armor, a black helmet with a small, green triangle on it, and carries a large rifle. His armor also comes with a retractable helmet and retractable gloves. Tetrax's Petrosapien physiology can manifest through the armor, allowing him to use his powers without removing it.

Tetrax is equipped with various devices and weapons at his disposal, such as a hoverboard, his own personal ship and a sonic device. In the original series, he had a holstered side arm that fired a blue energy beam, a smoke grenade to blind Kraab and SixSix with, and a device that contained and miniaturized both of them within a blue cube.

Tetrax has the same weaknesses as his species.

He is found in Forsaken Valley and his Fusion gives out the Humungousaur Nano.