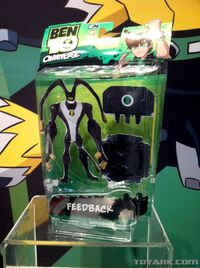 At one of the toy fairs, it was confirmed that he can shoot electricity from his antenas. I want to add it but I can't edit it, so I propse that we unblock it, since it's semi-protected (I'm a member, but I still can't edit it?)--Rath285 (Talk - Blog - Contribs)

it because Blaziken swiched the protection level back to administrators only.--The Master of Darkness 01:43, February 29, 2012 (UTC)

Added the Feedback info. Can you take care of the Ben 10,000 thing?

Put it in that article and we'll get around to renaming it later.

Link has some point older Ben should be able to use that alien even if the alien hasnt existed yet in Ben 10: Ultimate Alien

Not really. Remember that when the Omnitrix recalibrated, some aliens got locked out. Who's to say the new Omnitrix didn't do the same thing?

Showdown: Part 1 revealed Ben hasn't used Feedback in such a long time because Malware not only deleted Feedback from the Omnitrix, but made it impossible for the Prototype Omnitrix to accept another Conductoid (Feedback's species) DNA sample. SInce Ben used him in Store 23 which is actually after this episode either Ben found a way to bypass the error in the omnitrix or Malware actually does something that puts Feeback back into the Omnitrix and removes the error that prevented it from happening.Twilight-Darklight (talk) 22:35, February 9, 2013 (UTC)

he also has 2 similarities to chromastone: both can absorb and redirect energy, and both have a single cyclopian eye. Ralphjedimaster 22:15, June 8, 2012 (UTC)

dont forget they both have an output,choromostone has his crystals and feedback has his outlets.

young ben first used feedback with the prototype omnitrix, but we didn't find this out until omniverse, so should it be listed as a omniverse alien or a additional alien to the original lineup?DalekSupreme13 (talk) 09:29, July 16, 2012 (UTC)

if you talking about the template ,i think we should leave Feedback in the Omniverse section.--Linkmadara 19:25, July 22, 2012 (UTC)

To explain why Feedback only appeared as of Omniverse, Feedback hadn't been used by Ben during Alien Force and beyond because Malware deleted him from the Omnitrix and made it so Ben could never regain a Conductiod's DNA sample to re-unlock him due to an error planted in the Omnitrix soon after. Though 16nyear old Ben regains the ability to use him sometime between Showdown: Part 1 and Store 23.Twilight-Darklight (talk) 22:38, February 9, 2013 (UTC)

I think he's able to use Feedback again becausse he now has the TRUE Omnitrix, not the prototype Omnitrix. Ben might've found a Conductoid and scanned him with the true Omnitrix, thus regaining Feedback. Sam (BAZINGA) 23:46, February 13, 2013 (UTC)

Since the first episode of Omniverse has aired and we have seen Feedback, you you please allow registered users to edit it? Peter 10 (talk) 02:39, August 2, 2012 (UTC)

Does this article now adhere to the Manual of Style? I think it does, but I want to make sure.

I saw quite a few times on an Omniverse commercial that runs at the bottom of whatever show is on on Cartoon Network Ben turning into Feedback. That could be there simply for advertisement and has doesn't pertain to the actual series at all, but I think that it is at least worth noting.

Retrieved from "https://ben10.fandom.com/wiki/Talk:Feedback?oldid=516771"
Community content is available under CC-BY-SA unless otherwise noted.