Tack is an alien that Ben met at Plumbers' Academy.

Tack is a young, wimpy alien. He has dark hair that is in a mohawk style and also wore a dark brown jacket and light brown jeans. His body color is teal green and his eyes are the size of tennis balls.

He wore a Plumber suit while training at the Plumbers' Academy.

While at the barracks in the Plumbers' Academy, he wore an olive tank top and black shorts. 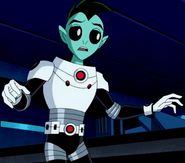 Tack in a Plumber suit

Tack while at the barracks in the Plumbers' Academy

Tack is a very kind and very shy alien. He also sees Ben as a role model, hero, and a best friend.

Tack has the ability to extend his neck, which he used to headbutt and stun Kolar.

Retrieved from "https://ben10.fandom.com/wiki/Tack?oldid=966650"
Community content is available under CC-BY-SA unless otherwise noted.