Swampfire is a humanoid, plant-like alien that has an overall green and black colored body, mostly with a red flame-patterned head and root-like feet, seemingly holding black rocks. His eyes are oval-shaped with points at each end with pupils copying the shape but are smaller. Also, his shoulders and head have red petals and his elbows and legs have green frills sticking out. Swampfire is taller than an average human and has a distinct rotten stench that worsens with heat.

In Alien Force and Ultimate Alien, Swampfire wore the original Omnitrix/Ultimatrix symbol on his chest.

In Omniverse, Swampfire's first design was similar to his previous appearance, except for having five fingers on his hands. Swampfire's skin was olive green, and his arms were larger. The red petals on his shoulders, along with the green thorns on his body, were thinner and longer. His torso design changed, splitting the black parts on his waist into two. The Omnitrix symbol also moved from his chest to his stomach.

Swampfire's first stage of "blossoming" was more muscular than his earlier design. He also lost his pupils, one of his red petals on each shoulder, and a green frill from each leg. The lines on his neck thinned and the lines on his chest moved upward and into a pointed down angle. His green color was also a shade lighter than his olive green.

Swampfire's second stage of "blossoming" had more muscle with the black lines being removed from his chest entirely. His red petals formed into a red thorn shape, with two being on each arm. The necklines were triangular and his shade of green was lime green. His face resembled his fully matured form except that instead of orange surrounding the eyes, there was black surrounding them.

As of Charmed, I'm Sure, Swampfire's second appearance, or his "blossomed"/"matured" form, is plant-like, but with major changes. He looks more muscular and taller, his skin color is now light green, his face is now colored yellow, red, and orange, his pupils are gone and his chin is more visible. His hands are now colored black, with four yellow claws (with spikes on the knuckles), and yellow holes in the palms, used to unleash his fire powers. He has six red horns with yellow spots (aesthetically resembling flames); two on each forearm, and one on each shoulder, as well as a green horn on each foot, knee, and elbow. He now has a large collar raised up around his neck, which is yellow on the inside. The Omnitrix symbol is still on his stomach.

Negative Swampfire looked exactly like Ben's Swampfire in Alien Force and Ultimate Alien, except his eyes and Ultimatrix symbol were recolored red.

Anur-Mirrored Swampfire looks exactly like Ben's Swampfire during his second stage of "blossoming," except his green body are recolored grey. 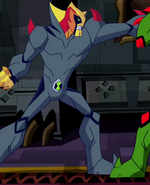 Swampfire has the ability to ignite methane in his palms similar to a flamethrower. After his blossoming, he ignites methane from yellow holes in his palms. His fire blasts are precise enough for him to shoot a cage with Kevin and Gwen in it, while the cage melted and Kevin and Gwen were left unharmed.[1]

Before "blossoming", Swampfire's fire blasts were powerful enough to harm Vaxasaurians[2] and Sonorosians.[3] In his "blossomed" form, his fire blasts have become more powerful than before.[4]

Swampfire is capable of limited flight through means of launching fire from his palms as jet propulsion, much like Heatblast.[5] He is also capable of breathing fire, as demonstrated by Swamps.[6]

Swampfire has a high degree of chlorokinesis,[DJW 1] being able to telepathically interface with plant life, manipulate and instantly create biological agriculture, and generate a gas that makes exposed plant life elongate, enlarge and ensnare enemies, seemingly being mutated by the gases. Some plants have a brief green aura when he influences them.[7]

Aside from Earth plants, Swampfire uses his telepathic plant interface with alien plant life, which was what allowed him to free Max from the Highbreed Tree Monster.[8] In his "blossomed" form, his telepathic influence over plants has extended to sentient plant life, such as the Mutant Pumpkins from Anur Transyl.[4]

Swampfire can generate seeds from his body that phase into or pierce into any ground or flooring before turning to vine tentacles strong enough to restrain a Highbreed[9] and a Chimera Sui Generis.[10] They usually are as small as pebbles, but they can sometimes become larger and sharper if used on a metal surface.[10]

Swampfire's body can generate a type of mud that sticks to everything but him, which he used to blind Negative Humungousaur, as the latter could not pull it off his eyes and had to change into Negative Big Chill to get rid of it.[2]

Swampfire is capable of regenerating and regrowing any damaged or destroyed body parts, allowing him to grow back lost limbs, holes in his body, or even his head. He was even able to reform his body from remains when it got splattered to pieces.[11]

Swampfire is also able to heal other people's wounds as demonstrated when Reinrassig III lost his hand when he saved Ben from a Rodilia Dentia.[12]

Another method of regeneration involves reattaching detached body parts. This is accomplished by manipulating his vine-like "veins" and tentacles to reach out and meld with the insides of the detached limb and return them to the body, allowing him to reconstitute automatically if damaged.[13]

Swampfire's methane has a very pungent smell that is intolerable to some species like the Incurseans, which will make them retch and faint.[1] Using his methane abilities, Swampfire can produce "sleeping spores" that can render humans unconscious.[14]

Swampfire has enhanced strength, being able to push over a Highbreed Weather Array using leverage by turning his feet into roots running deep into the ground.[15] Similarly, he was able to pull himself out and resist the gravitational force of a Null Void portal,[16] and even hold his own against Vilgax with his bare fists.[10] In his "blossomed" form, he appears to be even stronger than before.[4]

Swampfire's body structure allows him to walk straight through thin spaces such as the gaps between iron bars.[1] When he was crushed under a large container, his body deformed into vines that burrowed through and then out of the ground to reform him instantly. In the same instance, Kevin punched Swampfire in the torso, resulting in his fist getting stuck in it until Swampfire punched him back. Additionally, Swampfire was shown to be immune to laser bolts, as they simply passed right through him and seemed to tickle him.[13]

Swampfire is able to extend his fingers and feet into long roots that can dig through rock.[7]

Swampfire has rather strong teeth that are able to injure another Methanosian.[4]

Swampfire can generate vine-like tentacles from his back.[17]

Swampfire can grow plants from the ground simply by raising his hand, though he only gained this ability after "blossoming".[4]

Also after "blossoming", Swampfire gains the ability to grow vines with a flame tip from his hands and use them as whips, which are able to slice the plasma generated by Ball Weevil's species.[18]

Similar to Stinkfly's odor, Swampfire's swampy stench can make it hard for him to hide from anybody or anything capable of smelling.

Despite his regeneration, Swampfire can be continuously cut up by sharp objects, such as a Polymorph's Anti-Gravity Projector, preventing him from regenerating.[11]

Swampfire can be harmed by electricity, such as that generated by a Conductoid.[18]

Swampfire can be immobilized by ice, such as the ice breath of a Necrofriggian, though he can thaw himself out by igniting the methane in the palms of his hands.[15][2]

Swampfire's fire attacks can be canceled out by fire extinguishers.[19]

Swampfire is vulnerable to magic, as his back was scorched by a magic attack from Charmcaster (while empowered by the Alpha Rune armor).[4]

Swampfire's body heat can make it difficult for him to fight opponents that are attracted to heat, like reptiles.[20]

Swampfire can be immobilized and overpowered by the gravity powers of a Galilean.[18]

Like other organic beings, Swampfire is vulnerable to being aged to dust by the time rays of a Chronosapien or a Chronian.[21]

Swampfire's plants can be killed using liquid chemicals, such as a spray used by the Stalker.[19]

Originally, Swampfire was unable to control sentient plants, such as the Plant Clones, let alone weeds.[22] This weakness is no longer a problem ever since he "blossomed".[4]

If Ben turns into Swampfire with a broken limb, his limb will be twisted and shriveled, and he will feel pain from it.[23]

Gwen Alters the Past Timeline

Swampfire is a playable alien in all versions of the game.

Swampfire and Big Chill are the only aliens available on Ben's arsenal at the beginning of the game.

Swampfire is able to use his fireballs to ignite stacks of hay blocking the path.

Swampfire is vital for progression on the Rural Rumble level of the game.

Swampfire and Humungousaur are the only aliens available on Ben's arsenal at the beginning of the game.

Swampfire is able to unleash three small or one large fireball, a stream of fire, cause vines to erupt from the ground and imbue his punches and kicks with fire.

Swampfire is not required to be used at all in order to complete the game.

Swampfire is a playable alien in the game.

Swampfire could ignite his hands for "flaming fists," create a ring of fire by emitting gas to attack enemies, and cause thorny vines to sprout from the ground.

Due to the Omnitrix rebooting after Ben's abuse of the quick-change feature during his battle with an animated Mr. Smoothy mascot, Swampfire, along with Big Chill, Spidermonkey, Humungousaur and Cannonbolt were the only aliens available on Ben's arsenal upon his arrival on Vulpin.

Swampfire can use his fireballs to ignite leaking gas canisters and overgrown vines.

Swampfire is the only alien form that is able to defeat the Two-Headed Snake.

Swampfire is the only playable alien with two unlockable combo moves: Ring of Fire and Flamethrower.

Swampfire is vital for progression on the Vulpin and Terradino levels of the game.

Only Swampfire and Goop are available on Ben's arsenal upon his arrival on Vulpin.

Swampfire is able to safely bypass the dangerous flames produced by the exhaust vents on Vulpin, as well as ignite any plant life on Terradino that is blocking the path.

Swampfire is a playable alien in the game.

Due to the Omnitrix sorting out after Ben fiddled with it, Swampfire and Brainstorm were the only aliens available on Ben's arsenal at the beginning of the game.

Swampfire is able to spray gas that causes roots to grow into vines, which can be jumped on to reach otherwise inaccessible areas or to cross a hazardous path.

Swampfire is also able to rapidly regenerate his health meter, at the cost of draining the Omnitrix Energy meter at an equally fast pace.

Swampfire is a playable alien character in the game.

Swampfire can ignite methane in his palms to project fire. He is able to create plants and ignite them.

Swampfire is vital for progression on the Eiffel Tower, The Great Wall, and The Colosseum levels of the game.

Swampfire is a playable racer in this game on all platforms (except DS).

Swampfire is a playable alien in the game (not on 3DS). He has his original Omniverse appearance.

Swampfire is one of the aliens used by Ben in Battle.

Swampfire's special moves are Fireball and Vinespike, and his super move is Inferno Blast.