Surge is the Omnitrix's DNA sample of a Xerge from an unknown planet.

Surge is a purple alien who looks like a blocky purple X with a green eye on the top right side. He has green circuitry over his body. He wears the Omnitrix symbol in the center of his body.

Ben 10,000's Surge looks the same as present-day Ben's, except the purple parts of his body are instead colored dark gray and he has a slightly altered circuitry pattern. 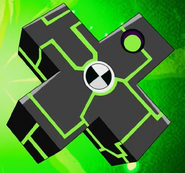 Surge is able to control other members of his race by combining with them. By doing this, he can use them to build giant constructs such as a large humanoid or animalistic body to use in combat.

Constructs controlled by Surge can easily rebuild themselves if they are broken apart.

Surge is strong enough to pull himself from the ground. Technically speaking, his physical strength increases exponentially when he combines with other Xerges.[1]

Despite his X-shaped body, Surge has enough dexterity to stand back up after falling.

Surge is quite agile, as he was able to somersault while avoid hits from the Clocktopus. He is also able to levitate and fly.

Surge is extremely durable, as he survived being smashed by the Clocktopus.

Surge can shoot a laser from his eye, as demonstrated by the other Xerge.

Surge is able to generate force fields, as demonstrated by the other Xerge.

Without other Xerges to combine with, Surge is practically useless on his own, as he has very few individual powers.[2]

Due to his body shape, Surge has trouble walking.

The Xerges that Surge controls can easily be taken by other dominant Xerges coming into contact with them.

Surge is a common collectable figure in the Cartoon Network Arcade app.

Names in Other Languages