Steam Smythe is a villain who first appeared in The Clocktopus. He hates modern technology and is always trying to "bring back the past".

Steam Smythe is an elderly bearded redhead who wears a steampunk armor suit and maroon pants. His facial hair consists of a tick mutton chops mustache. Most of his armor is a rusty brown color (almost like copper), but other portions are maroon like his pants, while others are light grey and gold. His belt buckle is an oversized gear. He wears a large top hat evocative of a smokestack, and his upper body appears to be entirely cybernetic up to his neck. 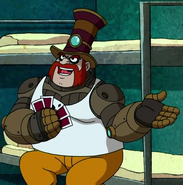 Steam Smythe in his prison outfit

Steam Smythe is desperate to get whatever he wants for only to keep history. He thinks the future is nonsense and believes the past is the only thing that is understanding and intelligible. He will effortlessly pursue any plans to get rid of the future and make the past the present. He refers to himself as a "gentleman", and will not hit a lady or a senior citizen. He also calls himself "a hero of the past."

Steam Smythe is a fan of older things. However, this has caused him to go crazy, thinking he is from an older time in the past.[DR 1]

In The Clocktopus, Steam Smythe attacked a pier named Squid City. It was being turned into an amusement park, and Steam Smythe wanted to prevent that, using his Clocktopus. Steam Smythe is soon defeated by Ben in a duel.

In Steam is the Word, Steam Smythe stole a time capsule left behind by Nikola Tesla. He was disappointed by what was in it, and threatened to destroy the town. However he was stopped and his blimp was destroyed. Steam Smythe swore to return and have his vengeance.

In Bon Voyage, Steam Smythe tried to destroy the SS Pettigrew, as he believed it was an even worse ship than one of the older models.

In Omni-Copped, Steam Smythe patiently waits for the Tennysons to arrive, after allying with Forever Knight. However he was easily defeated by Cannonbolt.

In The Hex Factor, Steam Smythe appeared telling Hex about a magic club, in a jail cell.

In Medieval Upheaval, Steam Smythe attempted to build a time machine and return back to the steam era, and prevent tech from being created. His time machine failed. However, he believed he was in the past due to landing in a renaissance fair after landing. He dueled Ben once more, believing he was a Tennyson elder in the past. Steam Smythe was tricked by both Ben and Gwen, and eventually believed to be back in the present after being defeated.

In Ben 10 Versus the Universe: The Movie, Steam Smythe planned to destroy a telephone industry, however he was stopped by Ben, who thinks their fighting has gotten repetitive.

He built many steampunk technological items. He built the Clocktopus, a bicycle plane, his own hot air balloon, robots, and more. This shows that he is extremely intelligent. He is also very skilled in combat as he was able to take on Humungousaur in a duel. Steamsmythe is also extremely durable being able to survive falls from all the way up into the clouds and survive being thrown a very long distance by future Fourarms.

As his weaponry and machines are old, they often fail to work properly or are very slow. This gives an advantage to his opponents. He also isn't familiar with modern technology.

The Steam in his name is a reference to the past technology and machines he prefers and uses, which run with the help of engines which use steam.