Squid-like species is an alien species. Some members of this species are often seen in Undertown.

Their body is massive with many tentacles. They only have one eye. They have tentacles similar to a mustache and hair. Their body and tentacles have several dark spots.

At a younger age, they are completely different. They have four tentacles with lumps and their brain is covered by a jelly-like matter.

They can keep their squid form as an adult. Those adults have a beak. They don't have eyes; instead of them they are using eyes prostheses. 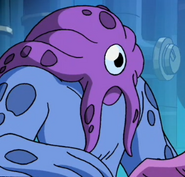 Retrieved from "https://ben10.fandom.com/wiki/Squid-like_Species?oldid=981418"
Community content is available under CC-BY-SA unless otherwise noted.