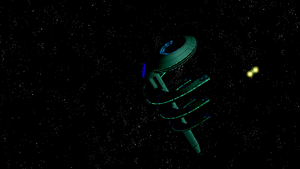 The Space Cafe, as it is called on account of its real name being unknown, is a cafe located inside an alien space station.

The Space Cafe appeared for the first time in Con of Rath, where Ben's team went to eat some food before continuing on to bring Tiffin to Jarett.

In Greetings from Techadon, Gwen went to the Space Cafe by herself to confront a satisfied Vulkanus, only to receive sarcastic and negative comments from him and Argit, who flirted with her.

Retrieved from "https://ben10.fandom.com/wiki/Space_Cafe?oldid=941709"
Community content is available under CC-BY-SA unless otherwise noted.