In the original series, Snare-oh's eyes and the gaps between his bandages glowed green. He wore a black and gold pharaoh's headdress, as well as black bracers and greaves, and the original Omnitrix symbol on his left shoulder.

In Ultimate Alien, Snare-oh was slightly taller and the green lines on his body were recolored gold. He wore the Ultimatrix symbol on his chest.

In Omniverse, Snare-oh's headdress is now black, with two glowing green gaps on either side of it, and a gold rimming at the bottom. His green eyes are now surrounded by crown-like golden spikes, his lower face is wrapped in bandages, and his chin is black with more green gaps on it, with a golden beard-like spine jutting from it. The gaps on his chest are now gone, and his bandages are more ragged, as well as more layers being visible, and is more greyish-brown in color. His upper chest and shoulders are covered by a large collar/wrap-like garment with green and black stripes. He also has black-and-gold pads on each shoulder, with each one having a green "eye" on them. The tendrils on his back are much shorter, the ties on his Shendyt are replaced by a single bandage, his braces and greaves now have gold trimmings and each have two, much larger green gaps on them. He has an extra "toe" on each of his heels and he wears the Omnitrix on a green and white belt around his waist.

Ben 10,000's Snare-oh is recolored to look like the Mummy, though his eyes and the gaps between his bandages glow green. 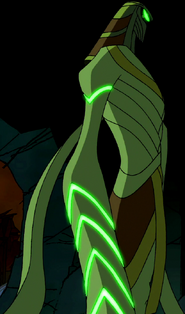 Being composed of bandages, Snare-oh can reshape his body at will. This allows him to split himself apart to dodge attacks and reform to counter-attack. He can also generate more bandages for various needs.

Snare-oh can regenerate himself and recover from many types of injuries, including being torn into confetti by a large fan, almost instantly.[1]

Similar to Wildvine, Snare-oh can extend his bandages, from his fingers or from his body, creating a sturdy wall.[2] He can also sever the bandages he extends.

Although Snare-oh is frail, he has some degree of enhanced strength, allowing him to lift objects and people with his stretchable limbs, and can punch away a Squid Monster with ease.[3] Furthermore, he is also strong enough to restrain even Fourmungousaur, who has the combined strength of Four Arms and Humungousaur, with his bandages.[4]

Snare-oh has a surprising amount of speed and agility for his size and bandages, even enough to scale walls and dodge attacks with relative ease.

By reducing himself down to single bandages, Snare-oh can slip through extremely tight spaces or small openings. This allows him to escape various traps or maneuver through cramped areas.[3]

Snare-oh can break his body apart to create a pile of bandages to cushion a landing. His face is separated from the rest of the bandages in the process.[5]

Snare-oh is immune to the effects of Corrodium and can survive in the vacuum of space thanks to his composition; these feats were first demonstrated by the Mummy.[1][6]

Snare-oh can block out Corrodium radiation with his bandages, allowing him to carry the dangerous crystal inside his body without irradiating anything nearby; this feat was also demonstrated by the Mummy.[1][6]

When extending his limbs or other parts of his body, Snare-oh becomes susceptible to strong winds and suction forces.

There is an upper limit to how much tension Snare-oh's bandages can withstand before breaking.

Snare-oh can be frozen solid by liquid nitrogen.[1]

Snare-oh can be tangled up in his own bandages, as demonstrated by Kuphulu.[7]

Snare-oh can be stepped on and squished, stopping him momentarily.[5]

His placeholder name, Benmummy, is a combination of "Ben" and "mummy".

Snare-oh's name comes from "snare", meaning to tie up, and the "-oh" is derived from "pharaoh", a word for an Egyptian king.