Slix Vigma is an alien robot that first appeared in Grudge Match.

Slix wears a long robe to hide his small legless robot body. He has long arms with incredibly long fingers/claws that are also hidden under his robe, along with his small tail like appendage. He also wears a small cloth over his voice box.

In Omniverse his design is simplified a little bit. He loses the robe for a smaller shirt similar with a tie and he now has more diamond shaped eyes as opposed the oval shaped eyes. Slix also has two eyes in the front of his face giving him a more humanoid eye structure. He now has crab like claws as opposed to his talon like fingers and his cloth is shorter, resembling a mustache. His fish-like tail is now fully visible along with his arms. 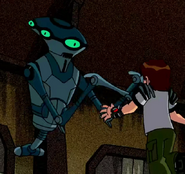 Slix Vigma without his robe and cloth in the original series

Slix Vigma is a sentient robot with a calm, yet sadistic manner and speaks with a polite, almost pleasant tone, even while having his own prisoners forced to fight to the death while he spectates from afar. He kidnaps beings from across the galaxy who he deems worthy to fight in his arena and has no concerns with what happens to them, even willing to kill them as they are expendable and can simply be replaced.

Slix Vigma is still an entertainer and crowd-pleaser seeking to make his fights as interesting and entertaining as possible. He chose for Ben and Kevin to fight as a team against his reigning champion Technorg knowing their hatred for each other would make for a fulfilling fight. He doesn't mind letting his prisoners think for themselves, such as showing mercy or even sacrificing all of them so long as it seems interesting and entertaining.

Slix Vigma is used to being in complete and utter control, constantly monitoring his prisoners, audience, and battles, both to prevent escapes and to tweak his fights to add more entertainment for his audience. As such he hates when his control is lost, as he lost his normal calm tone and attempted to kill Ben when he controlled him as Upgrade.

In Omniverse, Slix Vigma is much louder and more excitable, much like a stereotypical sports announcer.

Slix Vigma traveled through the universe capturing aliens and used them to fight for the amusement of the galaxy. He teleported the aliens into his ship, where he forced them to fight each other in arenas by using electronic implants. These illegal fights used to be watched by huge audiences.

In Grudge Match, Slix Vigma controlled the Megacruiser and used it to attract the alien public to gladiator-like fights. He kidnapped both Kevin 11 and Ben to fight for him after he observed them fighting on Earth. Ben used Upgrade to overpower him, although it was a little hard to take control of him. When Ben timed out, Slix attempted to kill him for that, leading to Kevin 11 ultimately destroying him.

Slix Vigma returned in No Honor Among Bros as the announcer of the Golden Fist Tournament. It is unknown how he came to be rebuilt.

He was arrested after the tournament, but Chadzmuth got his sentence reduced.[DJW 1]

In the Megacruiser, Slix Vigma is able to observe the audience and arena from many angles. Everything on the ship, including the escape pods and robot bodyguards, are controlled by him. He is able to turn on holograms from multiple parts of the ship to communicate to his prisoners, as well as unlock the escape pod doors using the tendrils in his chest.

Slix Vigma is able to hover above the ground and is strong enough to effortlessly lift up a 10-year old boy.

Despite being a robot, Slix Vigma has a strong will, being able to temporarily overcome Upgrade's control over him.

Because of being mechanical, it is possible for a Galvanic Mechamorph to merge with his body and control him against his will, though he can resist the control when he gains enough strength to break free.

Petrosapiens can easily stab through his body.