Slapback takes the appearance of a green metallic humanoid tortoise with grey eyebrows and green eyes. He wears a blue, black, and white jumpsuit covering all except for his arms and feet, as well as a grey and black mask.

Slapback wears the Omnitrix symbol on his back. 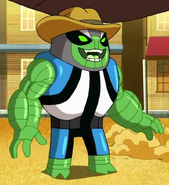 Slapback in Steam Fight at the OK Corral

Slapback is capable of duplicating himself to an unknown degree when his back is struck. This can also be accomplished whenever Slapback applies sufficient pressure on his own back by pressing the Omnitrix symbol.

The clones are not linked in any way and can act independently from one another.

Each time he duplicates, the resulting Slapback clones become smaller and stronger by a proportionate amount.[1]

Slapback's clones get more durable the more they multiply, with Slapback quarters being durable enough to harm Bashmouth, thanks to the metal that makes up their bodies, as it is quite tougher than crystal.[2]

Slapback's clones also become denser as they multiply, being able to withstand powerful winds.[2] It is possible for Slapback to duplicate enough to become as dense as a black hole.[DR 1]

Slapback is heat resistant and immune to lava. His clones are able to float on lava.[3]

Slapback is quite agile even while split into clones, as shown when his halves dodged Tetrax's crystal shard projectiles while riding some hijacked drones.[4]

The Slapback clones can fuse back together into the original Slapback form.[1]

Slapback seems unable to control his duplicating powers, as each strike on his back forces him to duplicate unwillingly.[1]

There is a clear limit to Slapback's flexibility, as he cannot reach his back if his arms are in a certain gesture.[5] Therefore, he is required to seek help from others when trying to activate either his duplication powers[6] or his Omni-Kix form.[7][8]

The combined weight and mass of each set of Slapback clones may cause issues to his surroundings.[9][10] This is due to his metal body being highly denser, which limits how many he can reasonably make but at the same time reducing the risk of copies being harmed.

Since each of the clones have their own sense of individuality, Slapback can end up fighting himself if incensed.[1]

If Slapback times out, the Slapback clones are automatically fused back to the original Slapback.[6]

Slapback's duplicating powers can be exploited, resulting in the clones being too small to take on others bigger than him.[11]

Slapback's clones can be fused back together with enough force.[12]

Slapback in his base form has a limited amount of strength that prohibits how much he can lift without splitting into clones, though even then certain opponents, such as a Tetramand or Arburian Pelarota, are resistant to the strongest state his clones can reach.

Slapback is a playable character, which is unlocked by default.

Slapback's name is a combination of the words "slap" and "back"; this is a reference as to how his duplication powers work: by slapping his back.

A "slapback" is also a kind of doubling echo with relatively long delay between repetitions of the sound, so that the individual echoes can be perceived.