The Creature from Beyond

Sir George (birthname Georgius) was an extremely old character in Ben 10: Ultimate Alien. He is the first Forever Knight, having founded them over one thousand years ago. In The Purge, he recruited the Forever Knight leaders to join his own faction of the Forever Knights, uniting all the separate factions into a single order, and later started a war against all aliens on Earth.

As an old man, Sir George was bald on most of his head, with a long, white beard. In The Creature from Beyond, he is seen in the beginning, watching TV in a wheel chair at the Senior Village. According to the nurse, George is not Sir George's real name and he is "ancient" because he has lived in Bellwood Senior Village since it opened in the 70's. In Solitary Alignment, Georgius is revealed to be his real name.

Sir George regains his youth in A Knight to Remember when he is reunited with Ascalon. Sir George had blond hair, a shortened blond beard, and wore Ascalon's armor.

Old George in his patient outfit 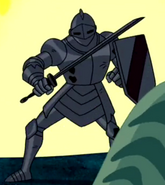 Like all Forever Knights, Sir George sees aliens and alien hybrids as abominations, to the point of saying that honor was irrelevant when fighting them. However, Sir George respects Azmuth, since he gave him Ascalon, which helped Sir George save humanity from Dagon.

Sir George has shown to possess some degree of arrogance, priding himself in the fact that he singlehandedly defeated Dagon (leaving out Azmuth's involvement), taunting his opponents, and claiming Ascalon's power could not corrupt him.

However, unlike other Forever Knights, Sir George does not seem to be greedy with power or have a desire to rule over others, and seems to be one of the few who is completely dedicated to the defeat of Dagon and the eradication or leave of alien life on Earth.

George was born in 231 AD in ancient Rome. He acquired immortality at some point by unknown means, living for over 900 years before becoming a knight in the medieval era.

Sir George forged the seal that kept the Lucubras at bay seventeen centuries ago. He also defeated their master, Dagon, with the sword Ascalon, carving out Dagon's heart and pinning it to the ground with the sword. He is the "First Forever Knight", having founded the Forever Knights.

Sir George moved to the Bellwood Senior Village and lived there for years until the events of The Creature from Beyond. He had a coin with the same symbol as the seal that held the Lucubra. He somehow knew when the seal was destroyed and immediately left. At the end of the episode he was seen looking at the damaged seal, looking down, then leaving.

In Ben 10,000 Returns, Professor Paradox warns Ben to "Beware Old George" and the Creature from Beyond.

In Prisoner Number 775 is Missing, Sir George arrives at Area 51, where he attacks the guards and removes the base, leaving a crater. A later episode revealed that he turned Area 51 into a Forever Knights stronghold.

Sir George's trip is explained in A Knight to Remember: he has been on a quest to find Ascalon and Dagon's heart, planning to use his old sword to destroy the heart once and for all. Using a long series of calculations, Sir George found when and where the shrine that holds Ascalon and the heart would appear next, leading a team of Forever Knights to intercept it.

At the shrine, Sir George and his knights were ambushed by Dagon's cult, the Flame Keeper's Circle, and their new leader, Vilgax. Vilgax tossed Sir George aside and grabbed Ascalon, gaining control over the sword's powers in the process. Sir George and Driscoll tried to stop Vilgax from freeing Dagon, and in the process, Vilgax was sucked into Dagon's dimension. Sir George was able to regain Ascalon, and his youth.

Immediately following this, in Solitary Alignment, Azmuth appeared and explained via a holographic flashback that he forged Ascalon and gave it to George in hopes that he could defeat Dagon. Now Azmuth wants Ascalon back, because he fears that Dagon will not underestimate Sir George a second time.

In The Beginning of the End, Sir George started a war with the Flame Keepers' Circle. Then he goes on challenging Dagon to a battle. Instead, Dagon gives him Vilgax to battle with, but Ben arrives to assist George against the powered-up alien.

In The Ultimate Enemy: Part 2, Sir George takes a direct lightning attack from Dagon and tries to defend himself using Ascalon. However, this backfired since Ascalon merely conducted the lightning into George himself, turning him into an old man once more and electrifying him to the point, where he falls to his knees and crumbles into dust. Following his death, Ben took Ascalon and used it against Vilgax, mentioning now-deceased George's catchphrase before charging into battle and defeated his old nemesis.

While as an old man, Sir George had inhuman physical strength and agility. He could lift or break objects with ease, like when he knocked out a security guard with a wooden barrier.

Sir George can use magic and read minds. His magic is powerful enough to entrap Lucubra and he could use it to sense when the seal was broken.

Sir George possessed Ascalon, the very sword that he used to defeat Dagon. When reunited with Ascalon, he regained his youth, as well as a suit of armor (which according to Driscoll, made Sir George immune to mind control).

Sir George is an expert swordsman and skilled hand-to-hand fighter, beating the Esoterica with little effort, and besting Dagon and Ultimate Humungousaur with Ascalon.

George is extremely vulnerable towards Dagon's lightning, and he tried to defend himself by using Ascalon, but it backfired since lightning struck him, which results in him turning him back into an old man, and as a result, he becomes electrocuted and crumbles into dust, which results in his death.