Birds of a Feather

Simian is an Arachnichimp con artist who debuted in Birds of a Feather.

Being an Arachnichimp, Simian bears a strong resemblance to Spidermonkey. However, he has yellow eyes instead of green, also lacking an Omnitrix symbol, and stripes on his tail.

In Omniverse, he still looks like Spidermonkey, but now has black eyes with yellow pupils. His hair is light blue with white streaks and now he has a flipped-up hairstyle. In addition, he wears clothing now, notably a pink golf shirt. He also now has two white stripes on his tail.

In Collect This, Simian wore a wig identical to Gwen's hair, a purple plaid skirt, and Kevin's blue wholesters. 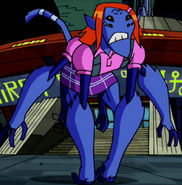 Simian appeared for the first time in Birds of a Feather, where, after arriving on Earth, he saw Spidermonkey, Gwen and Kevin being attacked by a group of DNAliens. Mistaking Spidermonkey for a true Arachnichimp, Simian interfered in the fight and forced the DNAliens to leave, saving the group. When learning he had actually saved "Ben 10" and his team, he declined their offer to join their team to fight DNAliens, stating he couldn't. He also said that he didn't know anything about DNAliens.

Later however, Ben surprised him when he was stealing equipment from a cryogenics lab. Goop helped him to escape, but asked for an explanation. Simian then replied he was the Prince of Aranhascimmia, and that in order to prove he was a worthy king, he had to get and bring back to his planet a crystal from a base on Earth's Moon. Feeling empathy for him, Ben decided to help him and convinced reluctant Gwen and Kevin to come too.

Arriving on the moon, the group successfully passed through the base's defenses, even being crushed before spraying the acid on the floor, but Ben started having doubts about Simian's motivations when he asked him to attack Lu, the harmless guard of the base, and tried to kill him himself when Ben refused. It was eventually revealed that Simian had lied to Ben, and was actually a mercenary hired by a Highbreed to steal the crystal, which was the power source of a communication base needed by the Plumbers to protect Earth from the inevitable Highbreed invasion. He pushed Kevin aside when he made his escape. Later, while he was getting to the ship, he attacked Gwen.

Ben later stated that he fully doubted Simian when he mentioned the DNAlien's acid, because Simian said he had no idea who DNAliens were.

When bringing the crystal back to his client, Simian realized too late that Ben had replaced the crystal inside the container with a DNAlien ear cleaner filled with worthless, but powerful acid. Thinking this was a joke from Simian, the Highbreed chased after Simian and seemingly attacked him with the acid. The Highbreed then took Simian to the Highbreed ships and locked him up.

Simian was imprisoned by the Highbreed, but he escaped and returned in Simian Says, stealing a Xenocite from the Highbreed during his escape. He then headed to Aranhascimmia where he sold the Xenocite to Mizaru. However, the Xenocite broke loose of the container and attacked Mizaru, forcing Simian to plead for Ben's help as this lead to a DNAlien pandemic on Aranhascimmia. At first, the group was reluctant but agreed to aid him since the innocent Arachnichimps shouldn't suffer because of Simian's selfishness and stupidity. After saving all the Arachnichimps and defeated Mizaru, Ben commented that Simian could be a prince, noticing him destroying the last Xenocite.

At the end of the episode, Simian sold a DNA Repair Gun he found earlier to Emperor Milleous, revealing he had returned to his criminal ways (thus proving that Kevin was right about him).

Simian returned in Collect This as the new "Gwevin" of the Ben 10 show. He was later revealed to have sold out the Earth to Collectimus in Ben's name. However, his plan went sour as he was "collected" by Collectimus as one of the Gwevin characters.

In The Color of Monkey, Simian appeared as a second-hand man to Argit, in Argistix Security. He later betrayed Argit by giving Rojo a box containing a Tiffin. After Rojo was defeated, Simian attempted to tell the Plumbers what Argit was really doing, but he was knocked out by one of Argit's quills and got taken away.

Like all Arachnichimps, Simian has enhanced hearing and agility, can stick to and scale walls, and shoot webs from his tail, which is also prehensile.