Shock Rock is the Omnitrix's DNA sample of a Fulmini from the destroyed planet Fulmas.

Shock Rock's body appears to mainly consist of blue energy. There are four retractable[merch 1] spikes protruding from both of his shoulders. His arms are rather large, stretching down nearly to his feet in resting position. His head, arms, chest, and legs are rock-like. His eyes are green and a moss-like substance can be seen around his neck and shoulders.

Shock Rock wears the Omnitrix symbol on his chest.

In Innervasion Part 4: Mind Over Alien Matter, the Omnitrix symbol was absent from Shock Rock due to being used inside the Omnitrix.

In Innervasion, while under the influence of the High Override, Shock Rock's energy turned purple and he gained a cape. His spikes were sharper and he grew four horns.

In Welcome to Zombozo-Zone!, Shock Rock wore armored shin guards, shoulder pads, and wrist guards alongside a helmet with a green feather.

In Xingo's Back, Shock Rock was pixelated with no moss on his shoulders and chest whatsoever. 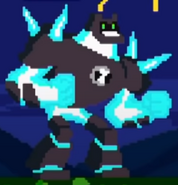 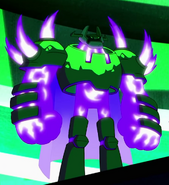 Shock Rock under the control of the High Override 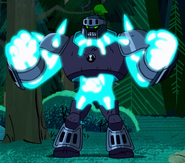 Shock Rock in Welcome to Zombozo-Zone! 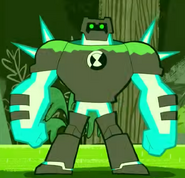 Shock Rock in And Xingo Was His Name-O 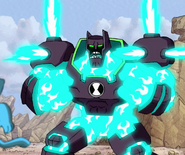 Shock Rock in Tales from the Omnitrix

Shock Rock Wearing A Helmet in Ben in Rome, Part 1: A Slice of Life

Shock Rock has the ability to release strong, blue electrical charges from any part of his body, which he can use to construct various weapons and tools such as a boomerang (dubbed a "bluemerang")[2] and a shield.[3]

Shock Rock is able to absorb external sources of energy, such as a Chimera Sui Generis' optical lasers.[4]

Shock Rock can stretch his arms at a certain extent.[5]

Shock Rock can power up and enhance machines with the use of his electricity.[1][6]

Shock Rock can use his electrokinesis to telekinetically move objects.

Shock Rock can create energy boxes that remain even if he times out.

Shock Rock can generate wormholes, as demonstrated by other Fulmini.[7] He can also increase the size of a wormhole, by using his energy to expand the particles.[8]

Shock Rock's DNA pod can absorb the excess charge from the Omnitrix and enhance the other aliens.[9][7]

Although he has not yet done so on his own accord, Shock Rock can manipulate the weather to the point of being able to create a massive storm.[DR 1]

While under the control of the High Override, Shock Rock's power would be boosted to the point where he could destroy Earth.[DR 2]

Shock Rock can inadvertently give his enemies an energy boost if the machine he is charging up is a trap for his power to siphon through.[1]

Shock Rock is vulnerable to being controlled by a superior member of his species, such as the High Override.[7]

Shock Rock is vulnerable to having his energy absorbed.[10]

Shock Rock's constructs can unintentionally electrocute humans who come in contact with them.[11][12]

Shock Rock is a playable alien in the game.

Shock Rock is a rare collectable figure in the Cartoon Network Arcade app.

Shock Rock is a playable alien in the game