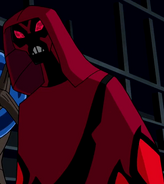 In The Ultimate Sacrifice, the sentient Ultimate Big Chill, along with the other Ultimates, convinced Ben to commit suicide so they can be free, Ben tried to, but was stopped by Azmuth and they were freed by him and sent to a planet where they could live in peace.