A Change of Face

Scooter is a criminal who appears in the original series. He is based on Scooter Tidwell, one of the animation directors of the show.[pop-up 1][1]

He has blue eyes, white hair and beard, and wears glasses. He wears an ocher shirt with a black collar, jeans and black shoes.

In The Return he wears a prisoner's outfit. 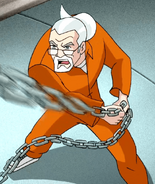 Scooter in his prisoner attire

In The Return, Scooter along with some other prisoners took over a prison bus. He attacked Stinkfly with a chain but ended up getting tied up with it. When the bus fell off the bridge he tried to escape but was stopped by one of Gwen's spells.

In Hijacked, Scooter and Frank tried to steal the Rust Bucket but were stopped by Four Arms and left tied up at a gas station.