In Destroy All Aliens, she wore a purple sweater over a lavender shirt, white pants, and purple Mary Janes.

In Ben 10 Returns: Part 1, she had a brown hair instead of blonde and her chin was pointed. She wore a white shirt with a blue apron and yellow gloves.

In Grounded and Ultimate Alien, she wore a red sweater, black pants, and black flats.

In Omniverse, she wears a light green sweater over a white shirt, tan capris, and white flats. 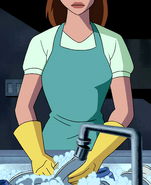 Sandra seems to contradict Carl when it comes to disciplining Ben, being more stern, though, like Carl, she insisted on being addressed by name.

Sandra seems to have a liking for health and fitness as she has been seen exercising with a fitness ball and also has rejected offers of cotton candy, stating that "processed sugar is poison".[6] Ben tries especially hard to avoid eating her "healthy" cooking.[5]

Sandra made her first chronological appearance in Destroy All Aliens where she and Carl ground Ben for a mishap in the school he attended where the Omnitrix accidentally teleports his homework and forced Ben to stay home to complete a history report. Later on, she and mainly Carl inform Max and Gwen that Ben has escaped the house. Then, Ben as Grey Matter enters into their house where Sandra and Carl find him. Sandra begins attacking him, but Grey Matter jumps on her head and she throws him outside. Grey Matter then transforms into Diamondhead and Sandra passes out and Max knocks Carl out. When Ben tries to transform, the Omnitrix malfunctions and transforms Sandra into Heatblast and Carl into Wildmutt. Eventually, Gwen and Ben use the Omnitrix to transform him and Sandra back into normal and they, having forgotten that they grounded Ben, allow for Ben to go on a fishing trip with Grandpa Max and Gwen.

Sandra made a cameo in the first episode, when she was washing dishes and yelling at Ben for running in the house. However, she was a brunette at the time.

In Grounded, Sandra drives with Carl into downtown Bellwood and are caught in the middle of a Highbreed's nighttime rampage, during which they spot Ben running towards the scene and transforming into Swampfire to fend the alien off. Upset with their son for hiding his “life-risking” activities for five years, and seeing him come home with a black eye from the fight, she and Carl forbid Ben from using the Omnitrix. However, Ben disobeys them when Gwen and Kevin are overwhelmed by DNAliens. Sandra and Carl spot Echo Echo trying to sneak out of the house and then he is grounded. Echo Echo nevertheless saves his cousin and friend by blasting the attacking creatures away via phone, which Sandra confiscates, pressuring him to spill the beans on Gwen. But Kevin is unable to contain Highbreed threat alone, so Ben blatantly defies his parents one last time, leaving them stunned as Humungousaur (literally) breaks out of his room right in front of them. Through this, Sandra and Carl realize Ben is trying to protect Earth, and were wrong to stop him, and decide to go help Ben save Kevin. Carl and Sandra save Humungousaur and Kevin from the Highbreed using a Space Bazooka. She and Carl apologized for the mistake they made and promised to never let that happen again.

Sandra returned in Hit 'Em Where They Live, where she, along with Ben's family, are attacked by Ben's enemies. When she was washing dishes, she was ambushed by SevenSeven without even realizing it, but was saved by Max. Later in the episode, she was kidnapped by Zombozo and taken to an abandoned carnival. She was saved by Gwen.

Sandra reappeared in Rules of Engagement, where Princess Looma meets her.

She later appeared in O Mother, Where Art Thou?, and convinced Ma Vreedle not to destroy Earth. She also cooked healthy food to Ben and Rook, following them around for most of the episode with Ben's leftovers.

In Vreedlemania, she brought Ben and Rook along to a dinner with Ma Vreedle and her family, having become friends with the criminal matriarch. When the reunited Vreedles cause trouble in Bellwood, Sandra manages to talk Ma Vreedle into stopping, and later comforts her when Pa Vreedle runs out on her.

In The Most Dangerous Game Show, Sandra briefly appears as one of the contestants chosen by Charles Zenith to compete for Ben's hand in marriage, but is removed from the game when Ben points out their relation.