Rush is the Antitrix's DNA sample of a mutant Kineceleran/unknown hybrid and Kevin's equivalent to XLR8.

Rush resembles a heavily-armored Velociraptor. He has grayish green roller balls on his feet and wears a green conoid helmet that leaves his red eyes visible. He has predominantly green armor covering his tail and light green body. Underneath his armor, he wears a sleeveless black turtleneck bodysuit. He has dark green fins on his back, which are comparable to the dorsal fins of a fish. His elbows and legs are sharply pointed, and he has three claw-like fingers on each of his hands.

In Wheels of Fortune, Rush wore a yellow Sumo Slammers 2 T-shirt with a blue collar and sleeves.

Rush wears the Antitrix symbol on his chest. 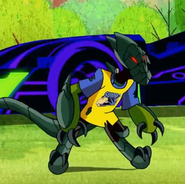 Rush in Wheels of Fortune

Being part-Kineceleran, Rush shares the same abilities as XLR8, such as enhanced speed, agility and reflexes. However, based on Kevin's alterations to the Antitrix, Rush is most likely faster, and much more powerful than XLR8.

Rush is able to achieve speeds up to 888 miles per hour, though the feat caused him visible strain.[1]

Rush has enhanced strength, being able to carry heavy loads of items at once and other heavy objects.[2]

Rush's strength allows for him to deliver a multitude of speed-enhanced attacks, such as punches, in brief and rapid succession.[3]

Rush is able to achieve speeds that are sufficient to create after-images of himself, making it appear like he is in multiple locations at once.[3]

Being part-Kineceleran, Rush shares many of the same weaknesses as XLR8, such as his speed being drastically affected by strong adhesives or his tail holding him down in place.

Despite his enhanced speed, Rush can only run to a limited extent for so long or for so fast before showing strain or fatigue.[1]

Rush's reflexes do not appear to be on the same level as Arburian Pelarotas, as Cannonbolt was able to catch his fists before he could punch him.[3]

It is implied that Rush may not be "good for punching", meaning that there is a limit to his strength.[4][3]

Due to Kevin's alterations to the Antitrix, Rush is too powerful for the inexperienced Kevin to currently utilize to the fullest.

Rush is a playable alien in the game (multiplayer only).

Minecraft: Ben 10 Rush is one of the aliens used by Kevin, and is an unlockable playable character, accessible via the Omnitrix after obtaining 99 Omni Tokens.

Rush is a common collectable figure in the Cartoon Network Arcade app.