Rojo, formerly known as Joey,[2][merch 1] is the leader of a heavily-armed female biker gang who first appeared in The Alliance.

In the Original Series, Rojo had maroon hair, pale skin, and black lipstick and eyes. She wore brown jeans as well as a gothic black jacket, belt, and choker necklace, along with a grey shirt and gloves. Rojo had 4 ear piercings; 3 on the right and 1 on the left. Her gang insignia was a skull, which she wore on each of the shoulders on her jacket.

After one of Vilgax's drones fused with her body, her jacket and pants became ripped, and her skin transmuted to a shade of red. She also developed cybernetic eyes, retractable claws and shoulder-mounted laser blasters.

When Rojo joined The Negative 10, she acquired an alien tech suit. The suit was primarily grey and came with a head guard and red shoulder pads. She now wore her skull emblem on her chest.

In Ultimate Alien, Rojo had lighter skin and shoulder-length red hair. She wore steel black and red armor with 5 silver spikes on each of her shoulder pads. She still wore her skull emblem on her chest.

In Omniverse, Rojo had paler skin, black markings extending from each of her eyes, and black lipstick. She wore a new head guard and her shoulder pads had less spikes on them. She wore the skull emblem on her chest. 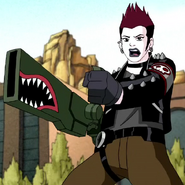 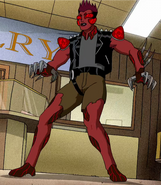 Rojo is a selfish, greedy, violent and amoral tomboy who is not hesitant to attack innocent bystanders simply because they annoy her. She's also more than willing to harm children like Ben and Gwen.[3]

When Rojo tried to rob an armored truck, she is thwarted by Four Arms and two of Vilgax's Drones coming after him. The remnants of one of Vilgax's defeated drones merges with Rojo as she investigates it, and she becomes a powerful cyborg. Rojo goes on a short crime spree before being contacted by Vilgax, whom offers to teach her how to use her power should she serve him, and threatens to destroy her should she refuse or fail his task.

Rojo is sent after Ben Tennyson and the Omnitrix Prototype in his possession at the hospital where Max Tennyson is staying, she's foiled by Heatblast's efforts. Later on Rojo rampages down at the local police academy in order to draw Ben out, but is turned back to normal when Upgrade merged with her, took over her body and shorted-out the spare parts, after which Gwen Tennyson knocks her unconscious for attempting a sneak attack on Upgrade.

Rojo returns in Ben 10 vs. the Negative 10, as part of the Negative 10, with new alien tech and armor; presumably supplied by the Forever Knights. In that episode she is also shown to have a rivalry with Charmcaster over being the "baddest girl" in the group. In the battle, she interferes with Gwen and Charmcaster's duel but gets blasted away by Charmcaster and Gwen's combined spell power. Later she quarrels with other Negative Ten members and later was trapped in the force field where the Sub-Energy once resided.

Rojo returned in Hit 'Em Where They Live, where she and her gang tried to rob a train. She apparently reformed her biker gang and upgraded them, using blue and yellow versions of her new red high-lighted suit. They were eventually stopped by Rath and the gang.

Rojo returned in The Color of Monkey. She is hired by Simian to steal an already illegally obtained Tiffin from Argit's new company Argistix. Shortly after being hired she roughed up a couple of bar patrons and ambushed Argit's truck that was supposed to contain the Tiffin, and instead only got an angry Techadon. Having evaded Ben and Rook, she and Simian make a second attempt to steal the Tiffin, with Simian bringing her the Techadon from earlier to have her tear it open.

While retrieving the Tiffin and rendering Simian unconscious, Rojo tears into the willing Techadon and steals the Tiffin just in time for Ben and Rook to give chase on an Upgraded Tenn-Speed. The chase ends at a Mr. Smoothy in Bellwood, where she is surrounded and arrested by the Plumbers alongside Simian.

In The Most Dangerous Game Show, Rojo is one of many contestants who were competing (unwillingly) to win Ben's hand in marriage on Charles Zenith's game show. After losing, she was transported to the Null Void.

When she merged with Vilgax's robot drone, the upgrade gave her the abilities of flight and superhuman speed. She also gained sharp metallic claws and robotic "eyes" on her head and shoulders: the head ones capable of zooming in and identifying objects like the Omnitrix from a great distance away; and the shoulder ones capable of extending out of her body and firing laser blasts. She also obtained enhanced strength, to the point where she accidentally destroyed valuable jewelry just by holding them tight enough in her palm, as well as enhanced durability, shown when she shrugged off a tank shell with no visible scratches. In this form, Vilgax is able to psychically communicate with her and show her visions, which cause her immense mental pain.[3]

In the Original Series and Omniverse, Rojo carried a unique laser rifle with a shark-teeth design on the front of the barrel.

In Omniverse, Rojo rode on a hovering jet-powered motorcycle, which she named Caballo (Spanish for "Horse"). Not only could it both ride on the ground and fly in the air, but it could also fire missiles from an opening on the front.

When in her drone-merged form, Rojo is able to be stopped by intense fire, as shown when Heatblast both knocked her away with the fire from his head and sent her flying by lighting up an oil puddle below her. She was also susceptible to her body being possessed and compromised by Galvanic Mechamorphs[3]

Rojo is Spanish for red, referencing her red armor. It is also a compacted version of Robot Joey.