Ripjaws shares a number of traits with Earth's aquatic life, such as alligators, eels, anglerfish, and sharks. He can change between a fishtail or legs at will and has a phosphorescent light on his head.

In the original series, his body was mostly grey. He wore the original Omnitrix symbol on a black patch over his left pectoral.

In Ultimate Alien, Ripjaws had a catfish-like face and had chest plates. In Perplexahedron, his tail had triangular lines and was grey like his skin and his lips were green. In the Ultimate Alien intro, however, his tail was black and he had black lips. He wore the Ultimatrix symbol on his chest.

In Omniverse, 16-year-old Ripjaws has his original appearance, except that his eyes are green, he now has arm and neck braces, his antenna light is green, he has a big fin on his back and his tail is now bigger. He now has a belt in place of the strap that holds the Omnitrix symbol on it.

11-year-old Ripjaws appears almost exactly the same as he did in the original series, except he now has green eyes and the Omnitrix symbol on his left upper torso is now green.

Kevin's Ripjaws looked the exact same as Ben's did in the original series, but without an Omnitrix symbol. He also has a black patch on the right side of his torso instead of his left.

Ripjaws in a yellow raincoat 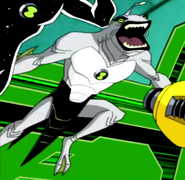 Ripjaws in the Ultimate Alien intro 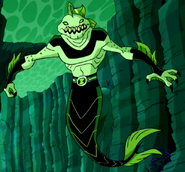 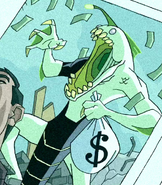 Ripjaws has enhanced strength, being able to easily punch a hole in a dock,[1][2] tear a door of the Perplexahedron open,[3] lasso an anchor,[4] and hold his own against Vulkanus while underwater.[5] He is also capable of lifting more than his own weight.

Ripjaws' large jaws and sharp teeth are his most deadly weapon, being able to shred even metal from submarines. He also possesses sharp claws that can damage metal.[6]

Ripjaws is rather durable, as shown when he was able to withstand being thrown against Sheelane's ship.[5]

Ripjaws is able to fit a mass supply of objects in his mouth.[1][4]

Much like an ordinary anglerfish, Ripjaws' lure can serve as a light in dark areas.[7]

At age 10, Ripjaws' greatest weakness was his inability to stay out of water for too long, requiring it to keep him from dehydrating. However, he has started to rely less on water as he got older, as he had no trouble surviving outside of water at age 16. However, exposure to extreme heat will cause Ripjaws to dehydrate quickly.[2]

Retrieved from "https://ben10.fandom.com/wiki/Ripjaws?oldid=980338"
Community content is available under CC-BY-SA unless otherwise noted.