Rex Salazar is a young EVO with the ability to cure other EVOs, including the ability to control his nanites using the Omega-1 Nanite. He can grow weapons and machines from his body, often using his limbs, and can communicate with technology, machines and even with nanites themselves.

Rex is Hispanic, being half-Mexican and half-Argentinian. He is most normally seen with lightly spiked, slicked back dark hair. He is also taller than most people his age. Rex also wears a pair of orange goggles on top of his head, with a matching red-orange patterned jacket. His T-shirt is blue on the top-half and white on the bottom-half, with two orange rectangles on the left pectoral. Rex wears black pants with blue geometrical patterns which glow whitish blue whenever Rex uses his powers. He also wears blue gloves with orange cuffs and blue-black shoes.

During the crossover, he briefly wore Ben's jacket.

Rex without a jacket 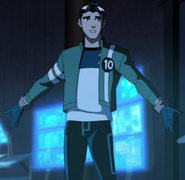 Like most teenagers who grow up secluded and isolated, Rex is overconfident, impulsive, and rebellious. He is quite headstrong, which he inherited from his mother, Violeta.[1] He has a quick wit and is constantly making jokes, even in the direst of situations, often falling into sarcasm. However, when Rex needs to defend himself, he does not hold back. Aggressive and reckless, Rex prefers to smash anything that gets in his way, much to Providence's annoyance. However, he eventually begins to show more discretion and consideration.

Rex has shown a selfless side to his personality, as he takes pride in curing many EVOs at his own risk. He has also shown an empathetic side to his personality, for instance, he understands that many of the EVOs he encounters were previously conscious people who still have loved ones concerned about them, and never resorts to execution no matter the species. Another example would be when Rex was the only one to see things from both Agent Six's and Serge's opposing point of views when discussing Aquania.

Like any teen, Rex faces tough and conflicting feelings about his situations, like his position at Providence. While he is loyal to the organization, sometimes the pressure of being the only person that can cure EVOs becomes too much for him to handle. Consequently, he sometimes breaks out of the base to go on "road trips", as he calls them, to blow off steam. However, he always returns, perhaps out of a sense of duty, purpose, and caring for his team. He also tends to be sympathetic towards others in similar situations, notably Circe and Breach. For instance, although Circe was than willingly joined the Pack, he understood her confusion and its relation of being an EVO and her hesitance behind joining Providence. When Breach was torn on her treatment by Van Kleiss and the Pack, Rex reached out to her to lend a helping hand, remedying her with the same tactics he used on himself. Ultimately, he never gave up on them.

Rex has been shown to be clever. For example, Tuck stated that Rex improvised the voice activated nano-ink tattoos that Rex, Tuck, Skwydd, and Cricket have, after a problem they had with an EVO that could shape-shift. Coming from a family of scientists, Rex is quite intelligent, as shown when he was able to take high school courses with ease. After taking a trigonometry pop quiz, Rex casually told Noah that it was "just trig" and explained that it was like aiming his cannon. Another trait that goes hand in hand with Rex's cleverness and wit is Rex's ability to manipulate his enemies. At one point Rex willingly tricked Van Kleiss by fighting NoFace, knowing that Van Kleiss needed him alive, while NoFace wanted him dead. However, due to the circumstances, Rex pretended to lie unconscious while Van Kleiss and NoFace fought each other for Rex's life. He also used Biowulf's insecurities and fear of being replaced by NoFace to persuade Biowulf's assistance in the long run.

Not much is known about Rex's life before the Nanite Event except finding out his parents and older brother were scientists and he was the first human subjected to the nanites.

In the crossover special, Ben enters Rex's world by accident, and Rex confuses Ben for a dangerous EVO. After Rex and Ben have a fight, they eventually team up to face the worst threat either of them have ever faced: the sapient nanite Alpha. A creature that has to suck the nanites from EVOs in order to survive, Alpha had previously been banished to what was believed to be a dimension of nothingness - however, Ben revealed that the villain had ended up in the Null Void, where he managed to feed on various alien prisoners until he could escape.

Rex and Ben eventually confronted Alpha inside the Bug Jar, where it absorbs Rex's Omega-1 Nanite in an effort to create a body to sustain itself. In response, Ben used Upgrade to increase Rex's power - together, they were able to do enough damage to Alpha that Rex was able to trap him in a super-concentrated ball of Nanites, which Ben dumped into the Null Void on his way back to his universe.

Rex arrived in Ben's Universe to hunt The Pack, and to obtain the Promethium. He encounters Ben and the team and forms a rivalry with Kevin. After helping defeat the Pack, Rex returned to his own universe through a portal created by Gwen.

Rex arrived in CN City where was defeated and turned into a statue by Strike prior to the events of the episode. Upon Strike's defeat, he and everyone else was freed and able to return home.

Like all living things on his Earth dimension, Rex has billions of nanites inside his body. After activation, the nanites mutate a normal being into an EVO. However, unlike most EVOs, Rex has the ability to control his nanites at will, allowing him to build various machines on his body. He can also use his nanites to communicate with a variety of machines and other Nanites and cure some EVOs of their mutations. Additionally, Rex can use his nanites to change out of his AMP suit.

Rex could build a copy of the Omnitrix if his nanites had the schematics, materials and alien DNA. However, he has nowhere near enough mastery over those nanites to concentrate long enough to build it.[DR 1]

Rex has at least a rudimentary knowledge of Spanish and Chinese, and tends to interlard his speech with Spanish wording.

Rex is vulnerable to having his builds dismantled by a Planchaküle.[DJW 1]