Rath resembles an orange and white bipedal muscular tiger with no tail and scruffy fur standing about 9 feet tall. He has one large black claw coming out of each of his wrists, green eyes, and black stripes on his shoulders, head and upper body. He has a white jaw, neck, chest, stomach, hands and feet and half-white eyebrows.

In Welcome to Zombozo-Zone!, Rath wore armored shin guards, shoulder pads, and wrist guards alongside a helmet with a green feather.

In Them's Fightin' Words!, Rath temporarily wore a U.S. Army uniform corresponding to the rank of Lieutenant General before ripping it apart to show off his "big muscles".

In Tales from the Omnitrix, Rath had a more muscular appearance and his eyebrows were much sharper.

In De-Fanged, Rath wore a purple vest, bright blue pants, and had a yellow Mohawk. He also had three black stripes on his chin.

The Omnitrix symbol is located in the center of his chest. 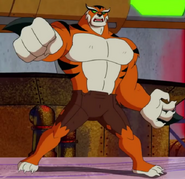 Rath with medieval armor in Welcome to Zombozo-Zone! 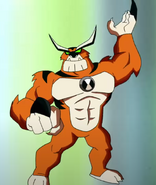 Rath in Tales from the Omnitrix

Uncommonly amongst Omnitrix transformations, Rath has an effect on Ben's personality. While in this form, he becomes more aggressive and hot-headed, frequently speaks in third person, and once angry, usually yells a sentence beginning with "Let me tell ya something," followed by the person or object's name (usually their full name or some lengthy description of them) he is referring to.

As Ben is still learning how to control Rath, he is unable to think clearly when in risky situations, as seen when people were about to fall off of a tree and he tried to chop it down.[1]

Rath often follows his natural instincts under certain circumstances, which will subsequently override his mindset and completely distract him from whatever he might be doing. This is most noticeably demonstrated with his chasing mice, rabbits and over such smaller animals over even the lives of innocents surrounding him, or even his own.

Rath demonstrates enhanced strength, as he could punch through a solid wall and lift a Cascan with ease.[2]

Rath's black claws are extendable, and can be used to slice or stab objects or enemies. These claws are also resistant against a Pyronite's fireballs.[3]

Rath is capable of producing shock waves and powerful roars.

Rath has enhanced smelling, making him an excellent tracker.[4]

Rath is an extremely capable fighter, as he has demonstrated numerous fighting tactics.

Rath can climb up surfaces quickly and effortlessly. He can combine this with his strength to carry extra weight while climbing.[1]

Rath is shown to be extremely durable, as shown when he managed to survive a rough fall from a cliff.[5] Rath's claws are also durable, as they could withstand Bashmouth's metal teeth.[6]

Rath has enhanced speed and dexterity, as he can run on all fours.[1][7]

Rath's brain is hardwired for aggression and as such, his biggest weakness is his lack of intelligence and highly aggressive temperament. This causes Rath to become easily distracted and difficult to stop once he starts fighting.

Despite his enhanced strength, Rath is physically weaker than Tetramands.[DR 1]

Like most actual cats yet unlike tigers, Rath hates water.[10][11] Oddly, he is not always bothered by it.[1]

Rath is a playable alien in the game.

Rath is a playable alien in the game, 2000 coins are required to buy him.

Rath is a playable alien in the game.

Rath is a playable alien in the game. You would need 800 coins to use him. His special attack is a dive attack.

Rath is a playable alien in the game. His attack is a short-ranged stomp in front of him. He is the only alien who can scale rock walls on the map.