In the original series, he is a blue, bipedal lizard with green stripes. It has fins and sharp claws. He has a helmet with dots on it. He has gills on his neck, one big purple eye, and sharp teeth.

In Secret of the Omnitrix, he looks the same as he did earlier in the original series, with the exception of his helmet, which is no longer transparent and has 6 lenses on the front.

As a Zombie Clown, he has a red flower on his chest, a green ruffled collar around his neck and a smiley mouth stuck on his helmet. 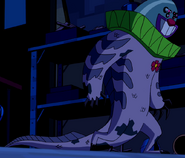 Psyphon's Minion as a zombie clown