View source
watch 01:39
Hawkeye Is Here To Amaze - The Loop
Do you like this video?
Play Sound

Professor Aniceto, known by his alias Punchinello when he embarked upon his spree of crime, is a drama professor at Friedkin University who appears in Mystery, Incorporeal and is defeated by Gwen in her Anodite form as Lucky Girl.

In his Punchinello disguise, Aniceto looks like a jester, with a nose made out of metal that shoots a red laser out of the hole. He possesses bronze bands around his wrists and neck that resemble revolver cylinders. His mask lip-syncs with his actual mouth and has sharp, jagged yellow teeth. 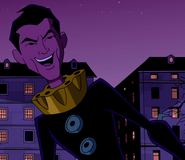 He is very dramatic, fitting for a drama teacher.

He was a professor at the Ivy League, the university at which Gwen studies. But in Mystery, Incorporeal he stole a strange artifact but was chased by Gwen as the Lucky Girl, then she unmasks him and all the students recognize him, in the end he escapes with the stolen object but when looking back he collides with the Proto-Truck and is taken to prison.

As Punchinello, he can fire lasers from a mechanical part in his mask, on its nose. Punchinello is also very agile, and managed to hold off Gwen in her Anodite form for a short while in their fight.

When Professor Aniceto's Punchinello costume's nose is attacked and destroyed, it leaves him unable to fire his lasers anymore.

Professor Aniceto is named after Vincent Aniceto, who worked on the original series and in Ben 10: Omniverse as a line producer. His Punchinello disguise is named and based off the classical character of the same name.