Protect the universe from alien criminal activities, terrorism and destruction

The Plumbers are an intergalactic law-enforcement organization that makes use of many high-tech gadgets and weapons to protect the planets in the universe from various alien threats and attacks.

They all wear a red space suit type uniform and green visors.

Plumbers hand out and assist in Missions, and are Shopkeepers. NPC Plumbers will have a red plumber suit, but if players choose Ben Tennyson as their guide, the Plumber armor set they eventually receive is grey in color. Plumber shopkeepers and characters are commonly found in high risk, high importance areas in the game, such as Foster's Home, Offworld Plaza, Townsville Park, and the Precipice. Some of the NPC Plumbers wear their Plumbers helmets, while others don't have the helmets on.

She is currently stationed in the Forgotten Falls keeping watch on one of the filtering machines that are making sure infected water from the Canopy doesn't spread down the river into the ocean. One of her missions will provide you the clue to Thromnambular VIII. You'll need to get her an items from nearby Great Terrorpins for a new fashion of hers. She got a bigger role upon the release of new Level 27 and Level 28 missions. She needs help with repairing a CD that Max had given her, then the number of Sickle Simians and to stop Numbuh 621 from mass-producing his Loconuts. Plumber Carol is also very untrustful of 2×4 Technology.

He is currently located in "Peach Creek Commons", where he is responsible for monitoring a wormhole in the future. He has a big gun and Plumber badge and their suit of the original series. So far he does not give you any missions.

He is stationed in Galaxy Gardens next to the infected zone Dexbot Dexbot. He helps in the mission A History of Planet Fusion (Part 2 of 4). He is also believed to be close to Max Tennyson.

He is located in the Plumber camp The Precipice, standing next to the Nano machine and the Power Shopkeeper. He is the brother of Plumber Charlie and Plumber Marlon. The only misson he will give the player is part three of "On The Precipice".

He is located in The Precipice. When the player finds Plumber Charley, he asks the player to take samples from meteorites from Planet Fusion.

He is currently located in "Sector V", where he is responsible for monitoring a wormhole, so far he does not give you missions.

He can be seen around the Monkey Skyway Agent in The Precipice. He is the brother of Charley, who he calls "Good-for-nothing". When the player finds Plumber Charley, Charley asks the player to take samples from meteorites from Planet Fusion. When Marlon sees the samples, he says they are useless shiny rocks. Plumber Marlon only gives the mission: On the Precipice (Part 1 of 3) to look for Charley. 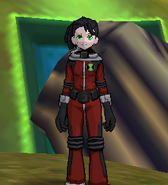 Nathan
Retrieved from "https://ben10.fandom.com/wiki/Plumbers_(FusionFall)?oldid=942264"
Community content is available under CC-BY-SA unless otherwise noted.