Down in the Dumps

Plen Stroff is a Splixson trainee recruit Plumber, and is a part of a squad alongside Ilma Nar with Cooper as his training officer.

Plen is about the height of an average human child. He has white skin, a black and white head, white face, along with black shoulders. Plen's hands are large with 4 digits and his feet are merely stubs. He has three fin-like growths on his head. 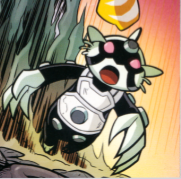 Plen as a Plumber cadet in Down in the Dumps

Plen Stroff was one of the Plumbers who tried to help Ben stop the Vreedle Brothers from breaking Elena Valadis out of Plumber custody. Ben treated Plen as a friend, and was surprised to see him again during the ordeal.

Being a Splixson, he shares many of the same abilities as Ditto.

Being a Splixon, Plen shares many of the same weaknesses as Ditto.