Pierce's Girlfriend is a minor character who appeared in several episodes, most notably the The Purge as Pierce's girlfriend.

She is a black-haired girl with black eyes and mid-length hair who primarily wears a black tank top and a red skirt.

In The Purge, she wore a white tank top and a purple skirt.

In Double or Nothing, she wore a purple tank top and a black skirt. 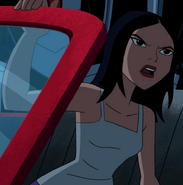 Pierce's girlfriend in The Purge

Pierce's girlfriend in Double or Nothing

In her first appearance, she applauds at Ben when he enters her school after hearing the news of Ben's secret life as a hero.

Sometime later, she initiates a romantic relationship with Pierce for an unknown period of time. She runs off when his true face is revealed by the Forever Knights.

In Double or Nothing, she can be seen watching Albedo's show next to Ben.