Phil Billings is an old friend of Max Tennyson. He first appeared in Omni-Tricked: Part 2.

Phil has brown hair and a grey beard and wears glasses, a blue button-up shirt and trousers. His mustache and eyebrows are brown. He has brown eyes and wears black glasses.

In Cosplay Day, he wore a Forever Knight suit for disguise. 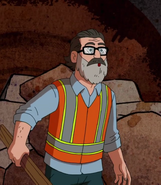 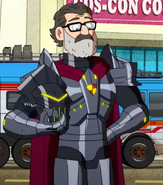 Phil is an assertive man who knows how to fix many artificial items. He seems to be very interested in the Omnitrix, as he was asking Ben many questions about it when he and Ben were in a dangerous situation.[2]

Phil can be easily impressed with alien powers he has never seen before, such as when he called Slapback's self-replication powers "remarkable".[3] He is also easily distracted when impressed by Ben's magnificent transformations.

Phil cares greatly for his A.I. son Phil Jr., as he was angry at Tim Buktu for causing him some sort of harm and threw him out of Area 55.[4]

Before the events of the series, Phil and Max, when they were pre-teens, made contact with a signal of alien origins. Ever since he's been gathering all sorts of alien tech.

At some point in his life, Phil used to work with Helen Troy, mentoring her. He also created an AI named Phil Jr. for science purposes. When Phil Jr. misinterpreted human as part of the Earth's suffocation, Phil deactivated him before the situation got worst.

In Omni-Tricked: Part 2, Stinkfly saved Phil from falling rocks. Phil then made the train drive and Wildvine carried Phil out of the train when it was about to hit a dead end.

In Omni-Tricked: Part 3, Phil puts a device on the watch that monitored the energy signatures of his rapidly-changing alien forms. After Ben is defeated by Vilgax, he tells Ben that he is reading energy signatures from ten aliens but no longer reads one for his human form.

In Omni-Copped, Phil gifted the Tennyson Family with the Omni-Copter for their overseas trip.

In Mutiny for the Bounty, Phil was helping fix the Omni-Copter after the events of Lickety Split.

In Forever Road, Phil let Ben race instead of him, as he was unable to drive in the desert due to his sand allergy. He then took the remote LaGrange got from Forever Knight and began to study it.

In Roundabout: Part 1, Phil helped Gwen and Max locate Ben by tracking the Omnitrix. Phil tells Max and Gwen that he, alongside a few "friends", has been tracking Forever Knight's movements over the past few months. He tells them that Ben's in Switzerland because Forever Knight is there at a laboratory in Geneva. The three arrive at a lab where Forever Knight is enacting his plan.

An enraged Breaker One-Nine attempts to steal the key from Gwen but Gwen throws it at Ben. Ben realizes that its a key and interests it into the Omnitrix giving Ben the power to Omni-Kix his aliens and defeats Breaker One-Nine. Phil analyzes the Omnitrix's new powers and reveals that it gives Ben's aliens armored forms but they'll time out quicker. Ben oblivious to the side effects becomes excited about these new forms.

In Buktu The Future, Phil arrived at Area 55, where the Tennysons were. He and Max drag Tim Buktu who was currently being controlled by Phil Jr. somewhere safe. He eventually had to reboot Phil Jr.

In Ben 10 Versus the Universe: The Movie, Phil called the Tennysons over, and told them about a meteor heading towards Earth. He tells them that he has found a significant discovery about the Omnitrix. He takes the key out, and tells them that it was inserted improperly. He then prepares Ben for a mission in space. After the preparations, Phil inserted the key in the right way, and Ben flew into space. Phil was able to track Ben after he flew into space. However Ben missed the meteor, and he mysteriously disappeared. Phil, Max, and Gwen brace for the meteor's impact, however nothing happens.

Phil tracks the Omnitrix's energy signatures, and tells Max, Gwen, and Glitch to head towards a cave. However, they instead find Kevin, with a buggy Antitrix. Phil then tries to fix Kevin's, though he is confused on how it works. Vilgax soon arrives and attacks then. Phil, Max, Gwen, and Kevin leave in the Rustbucket, and AntiVilgax chases them.

Soon afterward, Vilgax is defeated by Ben as Way Big, and Phil claims he can fix Glitch. He also suggest they head to Nebraska, since he's never been there.

In Ben Gen 10, Phil video calls Max and Gwen right before he is transformed into an alien.

Phil has a very high level of intelligence for a human[5][6] that is considered "off the charts" and "once in a century brilliant".[DR 1]

Phil is equipped with a laser sword, which he uses to fight Billy Billions' drones.[7]