Phillip "Phil" Billings[2] is a corrupt Plumber, who was Max Tennyson's old partner and helped in defeating Vilgax for the first time in their Plumber careers. He is also the original user of the Nemetrix.

Phil is a tall, muscular man and his face is fair complexioned. His hair used to be black but as he got older, he went grey. His hair has a lighter color on the side of his head. He has black eyes and wrinkles on his forehead. He has black outlines around his eyes. When he was sent to the Null Void, he was wearing the Plumbers' former uniform.

In Omniverse, Phil has become more well-built, his skin is pinker, and he has a scar on his right eye. Since he was unable to shave for six years, he has grown a long beard and a mustache, and his hair has grown longer and messier.

In The Rooters of All Evil and Weapon XI, Phil's beard is cut, making him look looked less worn, and his hair is styled in a ponytail. He also wears Proto-Tech Armor in the same color scheme as the Rooters.

Phil is twice as big as in his human form. He has a greenish-silver, shining body with big muscles. His lower legs and arms are covered by olive colored hair and they have four sharp, tan-colored claws on each extremities. He has six short spider legs on his ribs, and small spikes on his shoulder and thighs. He has a mane and flipped up hair coming out of his neck. He has red eyes and four small spider legs coming out of the back of his head. He has a big mouth which is almost always opened, revealing his red gums and a line of tan teeth.

Although Terroranchula Phil did not wear clothes during Max's Monster, he began wearing his human form's Proto-Tech Armor starting in The Rooters of All Evil. 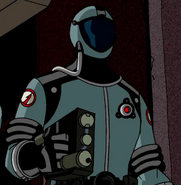 Phil as a Plumber 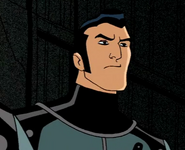 Phil as a Plumber (unmasked) 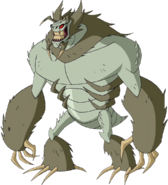 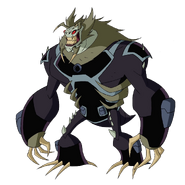 Terroranchula Phil in The Rooters of All Evil and Weapon XI

While Max was a member of the plumbers to protect the Earth, Phil was more egotistical about the job, and saw it more of an outlet for his glory to shine through. His Plumber days gave him a high level of knowledge on most aliens in the Milky Way, rivaling Max overall.

Because he constantly remembers the glory he had while still working for the Plumbers, unlike Max, Phil has become very arrogant and egotistical. He is very much willing to sacrifice comrades for his own personal gain. As such, he is not above using deception to give himself a life of luxury.

Ever since he wore the Nemetrix, his Terroranchula DNA has been making Phil compulsively seek out any electrical power sources to sate his constant hunger. From there, he has become compulsively treacherous, resorting to more ruthless means in the present day.

Phil was originally a Plumber who served as Max Tennyson's partner during their first fight with Vilgax. He helped Max defeat him by serving as a distraction for Max to glue Vilgax to a nuclear missile and launch it at his ship.

In Truth, Phil began releasing aliens from the Null Void to be paid to have them removed in order to get a quick buck. He offered Max and Ben to be his partners, but they realized what Phil was actually doing. The Tennysons stumbled upon his scam and accidentally sent him to the Null Void in the resulting struggle between themselves and him.

Phil spent the time between his first and second appearances fighting and warding off the Null Void creatures.

Once, Phil was captured by Dr. Psychobos, Malware, and Khyber, who forcefully used him as a guinea pig for the Nemetrix's test run against Ben as Terroranchula. However, the test failed miserably, due to the fact that sapient life forms, like humans, cannot handle the biofeedback of the Nemetrix. Shortly thereafter, Phil was thrown back into the Null Void by Dr. Psychobos.

Phil later appears in Max's Monster as a Terroranchula hybrid. It is revealed that Phil's mind no longer exists in his human body, as a result of the Nemetrix's side effects. Phil faked that he suffers from his mutation but the opposite of this was soon revealed. Phil attempted to use Ben's electrically powered transformations as power sources as well as the Nosedeenians in Undertown, but was sent back to the Null Void by Max.

Phil returned in The Rooters of All Evil, having joined the Rooters off-screen after being sent back to the Null Void. He taunted Max about how many partners he thinks he's had, leading Proctor Servantis to irritably reveal that Max's partnership with Devin Levin was a false memory. He briefly fought Patelliday and was bitten by him. When it was discovered that Kevin had fled, he and the other Rooters left.

In Weapon XI: Part 1, Phil fought against Feedback and had his energy drained. He was then manipulated by Alien X, who forced Swift to blast him with her eye beams.

In Weapon XI: Part 2, Phil was defeated by Argit when he scared him enough to shoot all his quills at him, knocking Phil out. His Plumber commission was revoked by the Magistrata, due to him being in violation of his Plumber mission. This left him stranded in the Null Void along with the other Rooters.

Even before his mutation at the hands of the Nemetrix, Phil has had years of Plumber training to his merit.

After becoming part-Terroranchula, Phil can shift between his human and Terroranchula forms. While transformed, Phil has the enhanced strength, speed, hearing, durability, and agility of an ordinary Terroranchula.[1]

Terroranchula Phil can absorb energy and redirect it as a blast with twice the power it originally had.[3] His teeth is also strong enough to crush a manhole cover in this form. [1]

Due to his exposure to the Nemetrix, Phil has the power to interfere with the Omnitrix, and make Ben only turn into electrical aliens.[1]

Phil can shoot energy webs similar to those of an ordinary Terroranchula from his hands.[4]

Conductoids such as Feedback can neutralize Phil's webs[5], as well as revert him back into human form.[1]

Despite his Terroranchula form's durability, Phil experienced discomfort from being bitten by Magister Patelliday.[4]