P'andor is a Prypiatosian-B from the planet Prypiatos[merch 1], and one of the five Andromeda Aliens from the Andromeda Galaxy who was captured by Aggregor. He is the alien Ben scanned to obtain NRG.

P'andor wears bulky silver armor that has three grill plates serving as eye holes so he can see out of his containment suit. Outside his suit he has the appearance of a humanoid phantom made of pure red and yellow glowing radioactive energy but still a physical being. 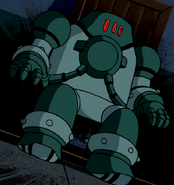 P'andor in his containment suit

P'andor is a (quite literally) power hungry and self-centered louse, as he was willing to endanger human lives by exposing them to potentially deadly radiation to satisfy his own hunger.[1]

P'andor first appeared in Galapagus's flashback in Escape from Aggregor. He, along with Bivalvan, Andreas and Ra'ad were already prisoners on Aggregor's Ship when Aggregor captured Galapagus. P'andor seemed to have a rivalry with Bivalvan in their captivity. When Bivalvan shorted out the device Aggregor used to neutralize the powers of the prisoners and they escaped their cell, P'andor opted to overthrow Aggregor and take control of the ship. Bivalvan on the other hand, wanted to take advantage of their unknown escape and call for help.

P'andor led Andreas to the bridge to confront Aggregor while Bivalvan (after P'andor burnt his arm), Galapagus and Ra'ad went to call for help. However, P'andor and Andreas' attack on the bridge alerted Aggregor to the others' plan which resulted in the five of them being put back in their cell. When Magister Prior Gilhil appeared, he, along with Bivalvan, Andreas and Ra'ad escaped, leaving Galapagus to be captured.

When Galapagus returned to only neutralize their powers again, P'andor called him a traitor. Eventually, the five managed to escape thanks to Galapagus, but they unfortunately crashed on Earth. P'andor then left the group to find a way to open his suit and to feed on any energy he could find to sustain himself.

In Too Hot to Handle, P'andor offered one million dollars to anyone who could break him out of his containment suit. Surgeon, Buzz and Hammer each tried, but failed. Kevin, originally searching for the fugitives, heard about P'andor's offer and decided to try his luck, using a sample of Taydenite to cut through the suit.

However, Kevin stopped when his Plumber Badge detected radiation coming from P'andor's suit. Angrily, P'andor offered one hundred thousand dollars to the failed safecrackers if they could capture Kevin, who escapes, but accidentally left the Taydenite behind, which is what P'andor would need. After a failed attempt at using a drill and Taydenite combo (which broke the drill itself), P'andor needed the Osmosian and had Kevin captured.

Tricking Kevin into losing his temper and absorbing the Taydenite, P'andor succeeded in getting him to break the seal of his suit and releasing his true form. Immediately, P'andor began feeding on power lines, increasing his size, strength and radiation levels. The three safecrackers that he used questioned about the money he promised them earlier, only to be fired upon by P'andor. While he was feeding, the Ultimatrix scanned his DNA, which he mistook for a weapon and fired at Gwen, who survived. Jetray then attempted to stop him, but he was unable to touch him and his laser blasts only fed P'andor.

After finishing absorbing energy from the power lines, P'andor set his sights on the nearby nuclear reactor. Ben attempted to convince P'andor to leave by changing into Water Hazard to pose as Bivalvan, which failed. Ben then attempted to use Water Hazard's powers to stop P'andor, but failed. Ben then became Big Chill to match P'andor's nova powers with ice and even it so that P'andor couldn't touch him either. Unfortunately, Big Chill's ice kept melting off P'andor. Kevin and Gwen arrived with P'andor's repaired containment suit and tried to shove him back in it, but P'andor still proved too difficult to get a hold of. Eventually, P'andor fed off the plant's main reactor (Uranium), grew to a giant, bulky size and complimented the dish ("Not a meal, a feast!").

After absorbing the carbon rods on top of the reactor core, Kevin managed to drain away P'andor's extra energy and shrink him back down to his regular size. Ben then became Ultimate Cannonbolt and helped Kevin put P'andor back in his suit. After the battle, the Plumbers had P'andor deported back to his home planet. Unfortunately, just before the ship could leave the solar system, it was attacked by Aggregor's ship and captured, killing the two pilots that escorted P'andor.

In Andreas' Fault and Fused, P'andor is seen in a stasis pod along with Aggregor's other prisoners.

In Ultimate Aggregor, P'andor and the others were forced to fight Ben and his team by Aggregor, and he presumably died when Aggregor absorbed the five Andromeda galaxy aliens.

As of the end of Absolute Power: Part 2, P'andor, as well as the other Andromeda Galaxy Aliens, are back to life after Ultimate Kevin was turned back to normal.

P'andor is capable of firing highly radioactive energy beams through the vents in his containment suit which can corrode or melt metallic objects. The energy P'andor radiates is hot enough to melt solid metal and rock through mere contact.[2] This energy can also be found in his saliva.[3]

P'andor can channel his heat underground, which results in the eruption of massive geysers of lava.[4]

P'andor is capable of producing his radioactive energy with his hands while inside his suit.

Because the containment suit is made of metal, P'andor is immune to being possessed by a Lucubra.[6]

P'andor is immune to radiation and extremely hot environments;[7] this feat was first demonstrated by Ultimate Aggregor during his visit to the planet Mikd'lty.[8]

P'andor's radioactive energy can melt ice, such as the ice breath of a Necrofriggian.[5] He is also immune to extremely cold environments thanks to the heat he generates, as demonstrated by Ultimate Aggregor.[8]

Outside his suit, all of P'andor's powers are enhanced massively. He becomes very agile and gains both flight and limited phasing abilities.

Without his containment suit, P'andor can manipulate energy at a higher level and is able to consume it simply as nourishment or to increase his power. He can also fire energy balls and blasts out of his hands and mouth.[9]

P'andor can make himself glow like a light bulb, which is bright enough to weaken Ectonurites.[10]

P'andor can breathe underwater and grow in size if he absorbs and consumes enough energy.[1]

Most of P'andor's abilities become weaker than outside of the suit.

P'andor's containment suit also completely removes several abilities, such as his agility and phasing. As such, he is unable to fly while in his containment suit.[11] On the other hand, the suit increases his physical strength.

Taydenite is the only known element that can damage P'andor's suit, outside of the suit itself.[1] Likewise, the Kraaho are the only known beings strong enough to rip open the suit.[9]

P'andor has a strength limit, as NRG was unable to rip the Cassiopeian Dream Eater off his armor.[12]

P'andor can be frozen and immobilized by ice, such as that generated by a Necrofriggian. Although his suit is heat resistant, he can still be slowed down by fire attacks.[5]

The eye holes in P'andor's suit are quite small, making his vision somewhat limited. He can be blinded even further by adhesives, such as those used by Sunder.[13]

P'andor is vulnerable to carbon dampening rods because they can slow down nuclear reactions, thereby inhibiting the radiation he generates.[1]

Similar to Pyronites, P'andor's powers can be negated when exposed to enough water, such as that generated by an Orishan.[1]

P'andor's radioactive blasts can be absorbed by the plasma generated by members of Ball Weevil's species, as demonstrated with Leander.[14]

P'andor is vulnerable to a Galilean's gravakinesis,[14] as well as the telekinetic abilities of a Celestialsapien,[15] as also demonstrated with Leander.

P'andor appeared as an enemy on the mobile game. After breaking out of his containment suit, he decides to destroy Bellwood. He then gets defeated by Ben and gets captured by Aggregor afterwards.

P'andor's name is based on Pandora's box, a jar that must not be opened or it will release all of the world's evil, just like how he was inside a containment suit and when it was opened, he caused trouble for Ben and the gang.