Overflow is the Omnitrix's DNA sample of a Cascan from the planet Cascareau in the Andromeda Galaxy.

Overflow is a red metallic alien. He has two containers filled with water on his head and has black mask-like markings around his green eyes. He has two tubes of water reaching from a respirator where his mouth should be to his back, and his forearms are filled with water. He has black three-fingered hands and two black toes on each foot.

Overflow wears the Omnitrix symbol on his chest.

In The Ring Leader, he wore blue pants, a yellow cape, and green goggles. 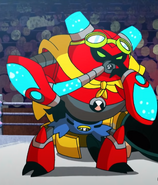 Overflow in a wrestling costume in The Ring Leader

Overflow in a daydream

Overflow has enhanced durability thanks to an armored exoskeleton that protects his body from damage. His armor is made of Serpent Glass, which is virtually invincible.[2] He can also withstand strong water pressure.[1]

Overflow has a degree of enhanced strength, being able to lift Frightwig and twirl her around.[3]

Overflow can launch pressurized water blasts from the tanks on his forearms. He can use these to propel himself by spraying water downwards.

Overflow can create weapons out of his water, such as blades[1] and whips, the latter of which has been demonstrated by Undertow.[4]

Overflow can spit water out of his respirator, as demonstrated by AntiVilgax.[5]

Overflow is able to breathe underwater and swim at high speeds. He also has amazing agility and great endurance.

Overflow can manipulate water into different states of matter.[DR 1]

Overflow has a small degree of cryokinesis, as he can create structures made of ice.[DR 1]

If Overflow shoots water at an electric device, he can be shocked while shooting, since water conducts electricity.[6]

Overflow can be harmed by magic, as shown when he was incapacitated by one of Hex's spells.[7]

Overflow can accidentally cause a flood in confined spaces if he releases too much water.[8]

Overflow is a playable alien character in the game. Overflow is initially unavailable, but is unlocked towards the middle of the The Hive level. Overflow is able to launch himself from specially designated platforms via water propulsion to cross long distances.

Overflow's Ultimate Ability consists of him punching the ground to unleash three water geysers at enemies. Overflow is vital for progression on the The Hive and the The Canyon levels of the game.