The Omnitrix is a watch-like device that attached to Ben Tennyson's wrist and is the device that the series revolves around.

The Omnitrix looks like a very big wristwatch, primarily black and grey in color, with a grey dial in the middle (like a watch face) which has a green hourglass shape. When Ben selects his aliens, it shows the alien's silhouette.

In Omni-Tricked: Part 3, Phil put on a blue device on the outer side of the Omnitrix. It was supposed to control the temporary malfunction on switching from alien to alien.

The Omnitrix was upgraded by Ben using Upgrade in Omni-Tricked: Part 4. The white chords and dial were silver and green. The four buttons on the faceplate were replaced with grey squares. There was an additional band of dark grey running around the center of the Omnitrix, the activation button was on this strip.

The Omnitrix got rebooted in Innervasion Part 5: High Override. The rim of the dial was white, the squares on the last upgrade were replaced by green arrows, and the area behind the hourglass and the wristband both became grey. The outer band was black with green arrows, and the sides of the dial and the ends of the wristband were silver. The top of the grey wristband had a green hourglass underneath the dial, and the top of the dial was black. Unlike the Omnitrix's last two versions, the third version did not have its tube-like circuitry.

The Omnitrix in Crossover Nexus looks exactly the same as season 3 but is adapted to the artstyle of O.K K.O Let's Be Heroes!.

The Omnitrix in And Xingo Was His Name-O looks the same but looks more cartoonish.

As of Summer Breakers, the latest upgrade colors the entire device almost completely grey, with the black ends and the arrows on the dial being absent. The hourglass coloring now remains 2-tone grey, and white support tubes surronded the dial.

The Omnitrix in Xingo's World looks exactly the same as season 4 but looks more cartoonish.

In Alien X-Tinction, the Omnitrix in Dimension 12041.5 looks exactly the same as Season 4 except the white tubes are facing the left side and has a black square.

The Alien Force Dimension's Omnitrix resembles a slimmer and sleeker watch-like shape, now with a green wristband, and the face of the dial becoming black and green. The inside of the hourglass symbol glowed in different colours during certain moments; these colours signify the mode that the Omnitrix was presently in. When Alien Force Ben is selecting his aliens it shows the alien's hologram standing on the core rather than the alien's silhouette.

The Omniverse Dimension's Omnitrix resembles a digital wristwatch. Its faceplate is now square instead of round and has a white, green, and black color scheme. The faceplate is black with two green stripes forming an outline for the hourglass of the intergalactic peace symbol. When the faceplate is slid back, the Omnitrix's core is revealed.

The Omnitrix of Maximillian's Dimension looks exactly like the Omniverse Dimension's except the inside of the Omnitrix is green and the faceplate can become red when it times out. The vents are also absent from this Omnitrix.

Gwen 10's Omnitrix looks exactly the same as Ben's Omnitrix's Season 1 design except the button on the body and the circles on the dial is absent.

The Omnitrix in Crossover Nexus

The Omnitrix In And Xingo Was His Name-O

The Omnitrix in Xingo's World 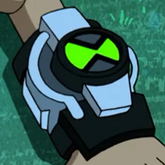 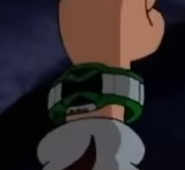 The Omnitrix in Gwen 10's Dimension in Alien X-Tinction

Omnitrix from aborted timelines in Ben Again and Again.

The Omnitrix in Pibby

The Omnitrix was created by Azmuth, and assisted by a brilliant Chimera Sui Generis named Vilgax. The device was made to allow the user to walk in the shoes of other alien races, and bring closer unity in the universe.

The following list shows all known transformations that are or have been available in the active playlist.

" f " indicates that the transformation appears in a flashback.

The following list shows all known transformations that are currently in the Omnitrix's DNA pod vault but have not been seen on-screen.